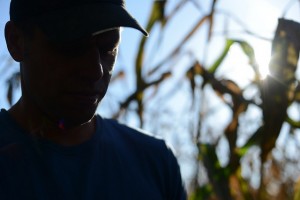 So not every guy proposes with lip syncing, rolling cameras, and a choreographed entourage.

Yeah — so what if your dad didn’t?

He just pulled that beat-up Volkswagon Rabbit of his over in front of Murray Reesor’s hundred acre farm right there where Grey Township meets Elma Township, pulled out a little red velvet box, and whispered it in the snowy dark: “Marry me?”

“He didn’t even get down on one knee or anything?”

You boys ask it incredulously, like there’s some kind of manual for this kind of holy.

And I’ve got no qualms in telling you no. No, he didn’t even get down on one knee — it was just a box, a glint of gold in the dark, two hallowed words and a question mark.

I know. When you’ve watched a few dozen mastermind proposals on youtube, shared them with their rolling credits on Facebook, marveling at how real romance has an imagination like that.

Can I tell you something, sons?

Romance isn’t measured by how viral your proposal goes. The Internet age may try to sell you something different, but don’t ever forget that viral is closely associated with sickness — so don’t ever make being viral your goal.

Your goal is always to make your Christ-focus contagious — to just one person.

It’s a man who imagines washing puked-on sheets at 2:30 a.m., plunging out a full and plugged toilet for the third time this week, and then scraping out the crud in the bottom screen of the dishwasher — every single night for the next 37 years without any cameras rolling or soundtrack playing — that’s imagining true romance.

The man who imagines slipping his arm around his wife’s soft, thickening middle age waistline and whispering that he couldn’t love her more…. who imagines the manliness of standing bold and unashamed in the express checkout line with only maxi pads and tampons because someone he loves is having an unexpected Saturday morning emergency.

The man who imagines the coming decades of a fluid life — her leaking milky circles through a dress at Aunt Ruth’s birthday party, her wearing thick diaper-like Depends for soggy weeks after pushing a whole human being out through her inch-wide cervix, her bleeding through sheets and gushing amniotic oceans across the bathroom floor and the unexpected beauty of her crossing her legs every time she jumps on the trampoline with the kids.

The real romantics imagine greying and sagging and wrinkling as the deepening of something sacred.

The real romantics know that stretch marks are beauty marks and that differently shaped women fit into the different shapes of men’s souls and that real romance is really sacrifice.

Can you see it again — how your grandfather stood over your grandmother’s grave and brushed away his heart leaking without a sound down his cheeks?

Fifty boring years. Fifty unfilmed years of milking 70 cows, raising six boys and three girls, getting ready for sermon every Sunday morning, him helping her with her zipper. Fifty boring years of arguing in Dutch and making up in touching in the dark, 50 boring years of planting potatoes and weeding rows on humid July afternoons, 50 boring years of washing the white Corel dishes and turning out the light on the mess — till he finally carried her in and out of the tub and helped her pull up her Depends.

Don’t ever forget it:

The real romantics are the boring ones — they let another heart bore a hole deep into theirs.

Be one of the boring ones. Pray to be one who get 50 boring years of marriage — 50 years to let her heart bore a hole deep into yours.

Let everyone do their talking about 50 shades of grey, but don’t let anyone talk you out of it: commitment is pretty much black and white. Because the truth is, real love will always make you suffer. Simply commit: Who am I willing to suffer for?

Sure, go ahead, have fun, make a ridiculously good memory and we’ll cheer loud: propose creatively — but never forget that what wows a woman and woos her is you how you purpose to live your life.

I’m praying, boys — be Men. Be one of the ‘boring” men — and let your heart be bore into. And know there are women who love that kind of man.

No, your dad did not get down on one knee when he proposed — because the romantic men know it’s about living your whole life on your knees.

There are Fridays. And the quiet romantics who will take out the garbage without fanfare. There will be the unimaginative calendar by the fridge, with all it’s scribbled squares of two lives being made one. The toilet seat will be left predictably up. The sink will be resigned to its load of last night’s dishes.

And there is now and the beautiful boring, the way two lives touch and go deeper into time with each other.

The clock ticking passionately into decades.