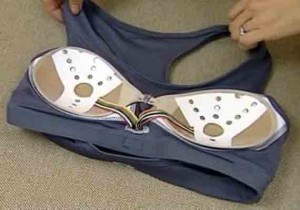 It lifts, it shapes, it boosts, it supports and now the bra has even more features to help women keep their shapely figures. Scientists have now developed what they are calling the ‘smart bra’ which has the ability to measure a woman’s mood and even help her prevent over-eating, therefore encouraging weight loss. The bra not only alerts the wearer to the precise time she may reach for food but it also is supposed to give her tips on how to resist the impulse to eat.

A professor in computer science and human performance from the University of Southampton, MC Schraefel, helped to design the bra which has sensors in it to monitor heart and skin activity. The prototype device’s data was analyzed by a smartphone app which highlights when emotional eating is likely to occur and provides helpful tips on how to avoid it. For example, the app may suggest to the user that they do breathing exercises to reduce stress.

Professor Schraefel suggested, ‘Emotional states, habitual practices, like snacking in front of the TV or grabbing a cookie when stressed, often go undetected by us – that’s the nature of habits – but they have real effects on our well-being.

‘Our work in this project, while early, shows that there is potential to design interactive technologies to work with us, to help us develop both awareness of our state, and offer options we’ve decided we’d rather take, to build new practices and support our well-being.’

The bra was birthed from a study called Food and Mood: Just-in-Time Support for Emotional Eating, which was written by researchers from the University of Southampton, Microsoft Research and the University of Rochester in New York.

The study embarked upon a mission to develop an intervention for food binging and emotional eating triggers as a means of emotional support. It concluded with the suggestion of the smart bra and corresponding smartphone app.

Related Topics:MC Schraefel
Up Next