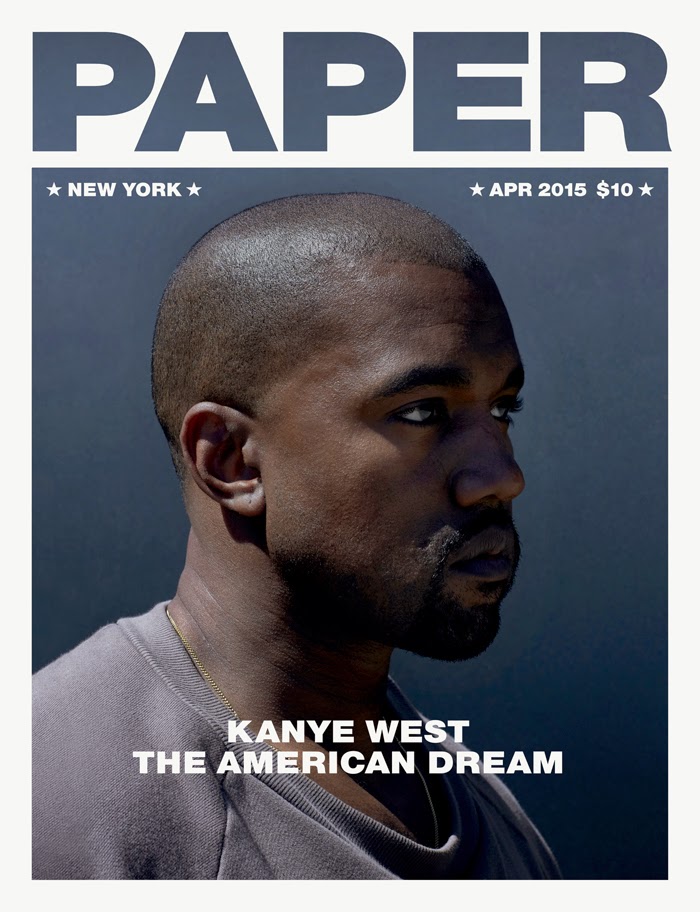 Kanye West is the cover for April 2015 issue of Paper Magazine where he spoke about his career, fashion, music, racism and the American dream.

On the American dream, he said to the Magazine “I know people want to talk about the American Dream, but my dream is a world dream. It’s a world in which everyone’s main goal would be to help each other.”

Kanye also recounted his experience in China as a coloured skin kid, which was re-enacted in the photo shoot, he said…

“When I was 10 years old I lived in China, and at the time they used to come up to me and rub my face to see if the color would rub off. It was really fucked up, but I feel like it was preparing me for a world perspective that a lot of my friends who never got a chance to travel didn’t get.”

” When I was in fifth grade in China, when kids would come up to me and touch my face, it was like they had never seen a black person before, but that was a while ago. That was 20 years ago and of course we’ve come a long way now. That’s not the current state of mind. On “Never Let Me Down” I rapped, “Racism’s still alive, they just be concealing it,” but for the next generation that’s not necessarily true. Racism is something that’s taught, but for the new post-Internet, post-iPad kids that have been taught to swipe before they read, it’s just not going to affect them as much. They realize that we are one race. We’re different colors — my cousins and I are different shapes and we’re all from one family.

“We’re all from one family called the human race. It’s simple as that. This race is up against some interesting things — poverty, war, global warming, classism — and we have to come together to beat this. It’ll only be as a collective that we can beat this, and we can. We can create a better world for ourselves.”