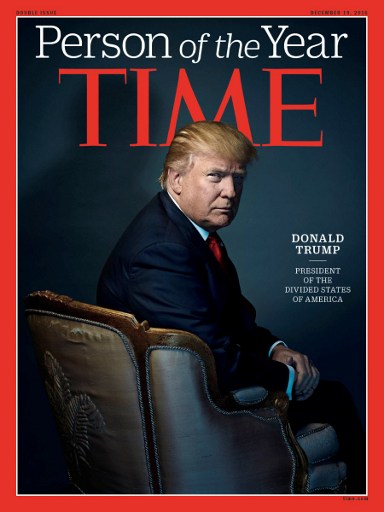 Time magazine on Wednesday named Donald Trump its “Person of the Year” for 2016 for his stunning upset election victory that rewrote the rules of politics, delivering him to the helm of a divided America.

The president-elect dialed into NBC television’s Today show, welcoming the accolade as a “very, very great honor,” denying he was responsible for divisions and praising outgoing Democratic President Barack Obama.

The real estate tycoon, who has never previously held elected office and shocked the political establishment by defeating his Democratic rival Hillary Clinton, is featured on Time’s cover described as “Donald Trump: President of the Divided States of America.”

The magazine said its person of the year, a tradition that began in 1927, “had the greatest influence, for better or worse, on the events of the year.”

“So which is it this year: better or worse?” editor-in-chief Nancy Gibbs wrote. “The challenge for Donald Trump is how profoundly the country disagrees about the answer.”

“Like all newly elected leaders, he has a chance to fulfill promises and defy expectations,” said Gibbs.

Trump won the title, she added, for “reminding America that demagoguery feeds on despair and that truth is only as powerful as the trust in those who speak it, for empowering a hidden electorate by mainstreaming its furies and live-streaming its fears, and for framing tomorrow’s political culture by demolishing yesterday’s.”

In the past Time has showed its editorial teeth by naming sinister figures — Adolf Hitler in 1938 and Joseph Stalin both in 1939 and 1942.

The president-elect told NBC’s Today show that he thought the sub-heading on the front cover about a divided America was “snarky” and denied that it was his fault.

“I’m not president yet so I didn’t do anything to divide,” he said, despite having inflamed the country by campaign rhetoric disparaging women, illegal immigrants and Muslims among others.