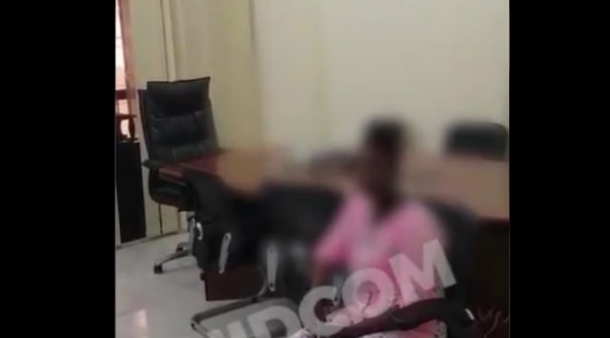 Peace Ufuoma, a Nigerian lady, who was advertised for sale on Facebook by Wael Jerro, a Lebanese, has departed Lebanon and on her way back to Nigeria.

Abike Dabiri-Erewa, Chairman, Nigerians in Diaspora Commission (NIDCOM), said on Saturday Ufuoma and 28 other Nigerians have boarded a flight heading for Nigeria.

“29 Passengers just departed from Lebanon. And guess what? Temitope, who was left behind last time, accused of murder is on board. And so is Peace Buhari, the girl who was put on sale on FB and rescued by the Nigerian mission,” she tweeted.

The Nigerian Diaspora commission handle wrote, “The Nigerian girl who was trafficked and put for sale by a Lebanese man, Wael Jerro, has been rescued. She is presently with the Nigerian Mission in Lebanon. This is coming days after the arrest of Mr Jerro”.

NewsWireNGR, recalls that Jerro had posted the passport of the victim on the “Buy and Sell in Lebanon” Facebook group, according to screenshots.

The message drew an angry response before reportedly being deleted.

Following the arrest of the suspect, a statement from Lebanon’s General Security said that such advertisements are illegal as they “fall under the crime of human trafficking and the publisher is subject to prosecution before the courts”.

Abuse of migrant workers is widespread across Lebanon under the kafala system, which binds workers to employees and gives them few rights. It is estimated that two workers die per week, often through suicide or while attempting to escape.

In March, the body of 23-year-old Ghanaian woman was discovered days after she made a desperate plea for help in social media posts. Police are investigating it as a suicide.

A string of Nigerian domestic workers have been rescued from Lebanon in recent months due to abuse.