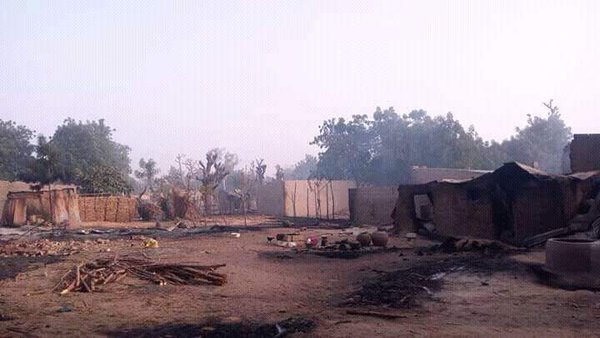 More than 100 people were killed by Boko Haram terrorists in a deadly attack on Dalori village in Borno state. According to the Nigerian army, the insurgents used different ways to kill the innocent indigenes of the small village.

The army stated that the “insurgents came in two Golf cars, motorcycles, started opening fire and burning houses,” on the night of Saturday, January 30.

In the afternoon of today Sunday, January 31, the military added that it was not just a direct attack on the people that the Boko Haram members used, that they also deployed 3 different suicide bombers to blow themselves up before the residents could escape.

The terrorists were on rampage for almost 4 hours in which as many as 100 of the innocent residents were killed according to eyewitness accounts. Information also had it that 35 dead bodies were initially brought to the Maiduguri Specialists Hospital, while another 70 were later deposited to become 105 dead bodies. The number of those that sustained various degrees of injuries was put at least 100.

One Alhaji Dambatta who is a member of the Civilian-JTF told newsmen that some dead bodies were yet to be evacuated from Dalori village as all those who died as a result of the suicide bombings have not been discovered.

Alhaji Dambatta said: “The casualty is beyond our imagination and most of those that were injured are in very critical conditions. Many of them may not survive because of the degree of injuries.”

You Will Be Teary After Looking At The Gory Images From Dalori; B’Haram Tears Borno Apart [Warning]