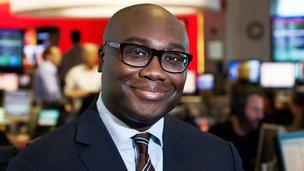 The BBC is launching an award in honour of its presenter, Komla Dumor, a year after his unexpected death aged 41.

Komla Dumor was an exceptional Ghanaian broadcaster who in his short life made an extraordinary impact – in Ghana, in Africa and around the world.

According to the BBC, Komla represents a confident, savvy and entrepreneurial side of Africa. Through his tenacious journalism and compelling storytelling, Komla worked tirelessly to bring a more nuanced African narrative to the world.

“The BBC is committed to continuing Komla’s legacy. We are proud to announce the launch of the BBC World News Komla Dumor Award.” Statement reads.

The award will be given to an outstanding individual living and working in Africa, who combines strong journalism skills and an exceptional talent in telling African stories, with the ambition and potential to become a star of the future.

“Through the award, we will invest in the future of African journalism by offering the winner the chance to come to the BBC and share Africa’s stories with the world.”

The winner will be given an opportunity to gain recognition and experience, working with teams across BBC News during a three month placement in London. The winner will also have the chance to broadcast on TV, radio and online to the BBC’s audiences of 265 million across the world.