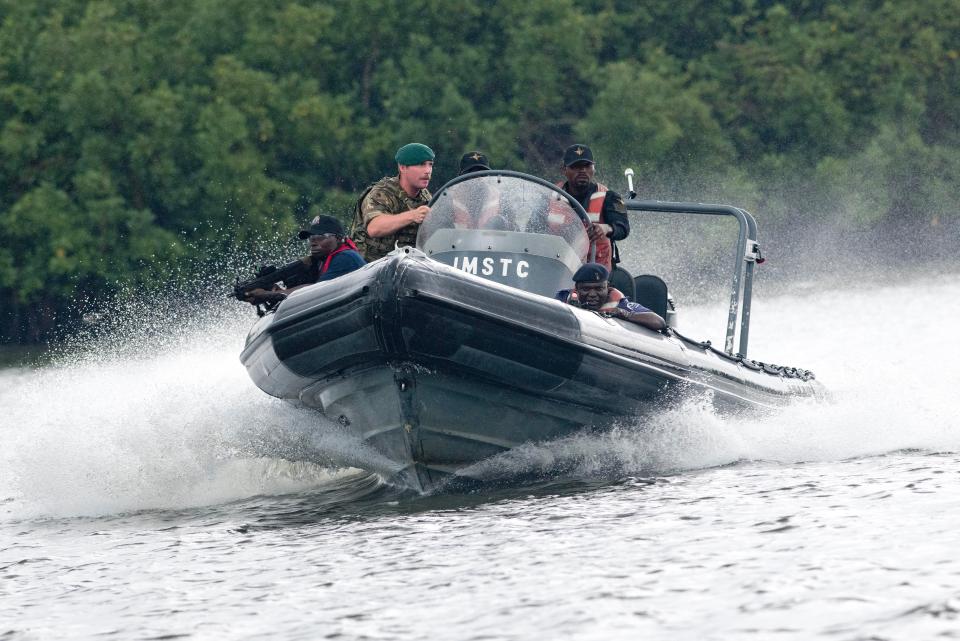 Leaders of IS are sneaking battle-hardened jihadis from Syria into Nigeria to train terrorists there for possible attacks in Britain.

Fanatics from the West African state are also being sent to the Middle East for training in a chilling “exchange programme”.

Insiders fear strong links between Nigeria and the UK will make it easier for IS to send its killers here to bring more death and destruction.

Now more than 150 British troops are conducting counter-terror training with Nigerian forces in an attempt to stem the bloody tide — and stop IS taking hold in the region.

At one training mission in the northern city of Kaduna, a senior Nigerian Air Force commander revealed how his country’s jihadi groups were learning from IS after swearing allegiance to its black flag.

Group Captain Isaac Subi, 46, who has been fighting terrorism across Africa since 1991, said: “They come and train their fighters here and some of our insurgents too are granted access to their training in Yemen and Syria, acquiring those skills and they come back and teach others.

“They have this exchange programme of fighters.”

Their poisonous influence has already ended in horror attacks on British streets.

Fusilier Lee Rigby was stabbed to death in 2013 in London by Michael Adebolajo and Michael Adebowale, both of Nigerian descent.

It is feared IS will exploit regular flights between Lagos and London to export more evil to the UK.

Group Captain Subi said the lack of secure borders across Africa also makes it easy to spread the bloodshed.

He added: “There are hundreds of fighters. It’s a virus that spreads across our borders. Their action leaves trails of blood and tears and sorrow.”

Over the past four years, more than 20,000 people have been killed in Nigeria, mainly in the north east where a population of 900,000 is now dominated by up to 3,000 terrorists.

Another two million have fled the bloodshed. Captured men are made to fight for the fanatics and seized women are forced into marriages.

But one terror tactic unique to Nigeria is the barbaric use of children as young as five to carry out suicide bomb attacks.

Brigadier Charles Calder, Britain’s defence adviser in Nigerian capital Abuja, said of the IS threat there: “In time, unchecked it could present a threat to both UK interests and conceivably the UK mainland.”

Brig Calder said sending small, hand-picked teams out to military training hubs across the country was the best way to prevent Nigeria collapsing.

Brits have so far trained 35,000 military personnel there and commanders say these are now performing better on the frontline.