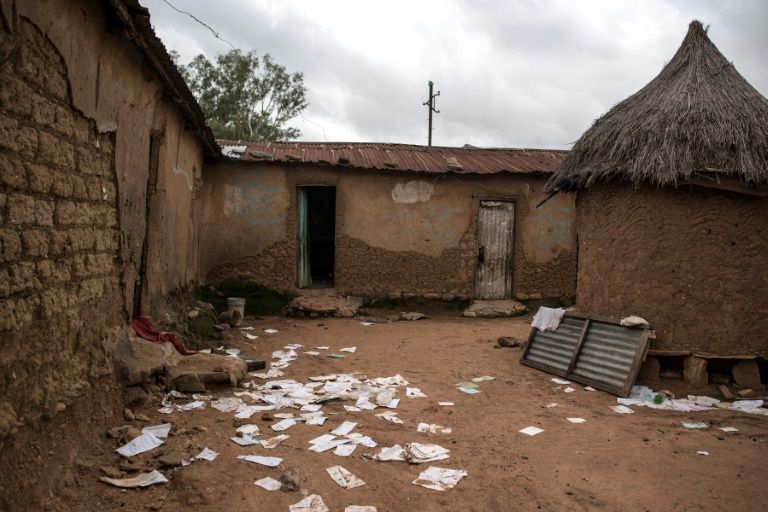 In the fields of Nghar, 79 people lie under a vast mound of earth — victims of a wider massacre that killed more than 200 in villages across Plateau state, central Nigeria.

Last weekend, Nghar was one about a dozen villages in Plateau that was attacked by hordes of assailants armed with automatic weapons and machetes.

Locals say the death toll announced by the state governor could even be an underestimate.

Hundreds of men dressed in black, some of them with their faces covered, surrounded the villages and began shooting from nearby hills, the villagers said in accounts confirmed by police.

It unleashed hell on a countryside of breathtaking beauty, a place where domes of rock rise out of lush agricultural land and cattle roam peacefully.

Mafwak Mature, 68, burst into tears in front of the mass grave where his neighbours are buried. “Those who attacked us burnt everything,” he told AFP.

“My house has been razed, they looted all the valuable items, the motorbikes, the fertilisers I used for my farm, even the television.

“All I have left are the clothes I am wearing now,” he added, pointing to his worn grey suit.

When the first shots rang out around the remote village on Saturday at about 3:00 pm, many people in Nghar instinctively shut themselves away and prayed to God to save them.

Thirteen people from the same family were trapped and burnt alive when the gunmen set their house on fire.

Their blackened bodies were taken away the next day on what was left of the corrugated roofs. Those who tried to flee were brutally cut down.

In Nghar and other villages, residents blame nomadic ethnic Fulani Muslim herders of carrying out the attacks against “indigenous” mainly Christian farming communities.

The attacks were the latest in a seemingly endless cycle of tit-for-tat violence that has gained in intensity in central Nigeria in recent months.

Access to land and water is the main driver of the long-running conflict.

But it has taken a dangerous turn and become part of Nigeria’s divisive identity politics in a country where population growth is putting scarce resources under pressure.

Plateau has historically been a hotbed of violence between Christians and Muslims, which make up roughly half of Nigeria’s more than 180 million people.

But unlike in other central states such as Benue or Taraba, which have also seen bloody communal clashes since January, there has been a fragile peace in recent years.

Reconciliation efforts have been brokered by the authorities and non-governmental organisations.

With a resurgence in tensions, some settled Fulani who have lived and traded alongside the local ethnic Berom majority for generations, fear being lumped in with the troublemakers.

“Those who came here are foreigners, we don’t know anything about them,” said the head of the Fulani community in Nghar, Chiroma Yacu.

“I was born here and my father died here. We have been living in peace together for a long time.”

Now there is suspicion.

By gutted homes and still-smouldering burnt-out cars, Christians point bitterly at Muslim areas which were mostly spared from the wave of violence.

In the village of Ganaropp, where 35 people were killed on Saturday, “people who fled to the mosque were lucky”, said Pam Nuhu.

“We were eating our evening meal when the shootings started around 5:30,” the 54-year-old father of seven children recalled calmly.

“I asked my family to run for their life and to go to the church. My first son was shot dead in the forehead. He was 19 years old and had just finished secondary school.”

Nuhu and others like him who lost everything are now on the move.

Mattresses, televisions, plastic bowls and sacks of rice are loaded onto the roofs of old cars or rented goods lorry.

One after the other, in deathly silence, heavily armed soldiers and police escort families as they drive to more secure nearby towns.

“I’m leaving to Mangu because I’m afraid, I’m really afraid,” said Paulina Auta, as she carried huge bags from her house to a grey people-carrier.

“I don’t know what I can do now, I have to start again from scratch, but if I live in this town they will come and do it again.”