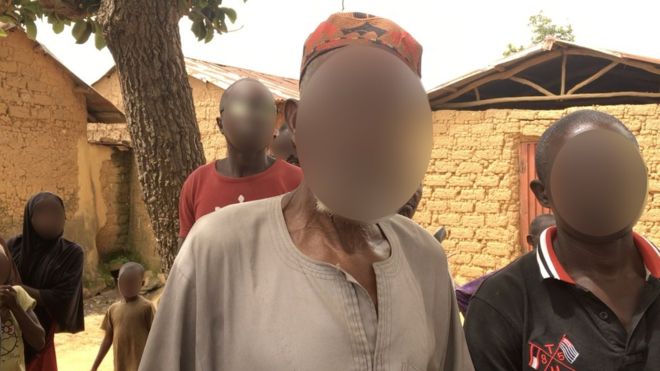 When an imam in Nigeria saw hundreds of desperate, frightened families running into his village last Saturday, he decided to risk his life to save theirs.

They were fleeing from a neighbouring village – a mainly Christian community.

They say they came under attack at about 15:00 (14:00 GMT) from about 300 well-armed men – suspected cattle herders, who are mostly Muslims – who started shooting sporadically and burning down their homes.

Some of those who managed to escape ran towards the mainly Muslim neighbourhood nearby where the imam lived, arriving over the next hour.

The cleric immediately came to their aid, hiding in total 262 men, women and children in his home and mosque.

“I first took the women to my personal house to hide them. Then I took the men to the mosque,” the imam told BBC Pidgin.

We have blurred the faces of the imam and the villages, for their own safety.

This was the latest wave of violence to hit Nigeria’s central region where farming communities and nomadic cattle herders often clash – usually over access to land and grazing rights.

The region is prone to religious tension – herders are ethnic Fulani and mostly Muslim, while the farmers are mostly Christian from the Berom ethnic group.

Hundred of people have been killed in 2018, and the tit-for-tat violence has been ongoing for several years. A report from 2016 suggested Nigeria’s pastoral conflict was the cause of more deaths that year than Boko Haram.

Had the imam not intervened, the death toll may have been much higher, as the armed men stormed into the mainly Muslim village in pursuit of those who had fled the mainly Christian village nearby.

One of the villagers described the panicked scenes, saying: “First they attacked a village before us so we ran to the security post.

When the attackers heard that the villagers had fled towards the mosque, they demanded that the imam bring out those he was hiding.

But the defenceless imam refused to comply – and also refused to allow them entry to the mosque.

He began to plead with the herdsmen, who were threatening to burn down the mosque and his house.

He then prostrated himself on the floor in front of the armed men.

Along with some others in the Muslim community, he began to cry and wail, asking them to leave.

And to their amazement the herdsmen did go – but then set two nearby churches on fire.

Related Topics:NigeriaChristiansKillingsMuslimsJos Massacre
Up Next