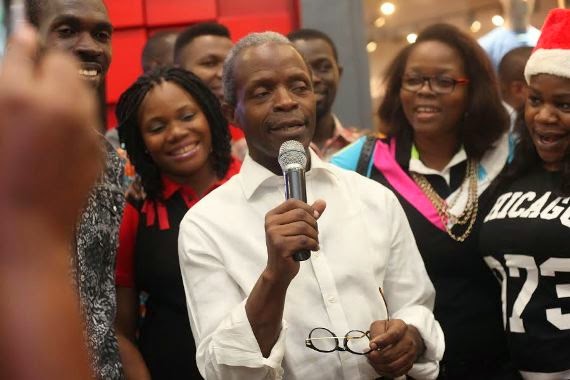 General Muhammadu Buhari’s running mate in the forthcoming 2015 Presidential elections, Prof Yemi Osinbajo spent Christmas eve with his supporters and he did that with a surprise visit to the ever busy The Palms Mall at the Lekki axis of Lagos.

He stormed the mall with choreographers and carol singers. He was seen signing autographs, exchanging handshakes and posing for selfies. He later went on to make a short speech when he wished everyone a merry Christmas.

Hours later, he was a passenger in a BRT bus as he spoke to fellow passengers.

Professor Osinbajo meets with passengers in a BRT bus

Related Topics:Professor Yemi Osinbajo
Up Next