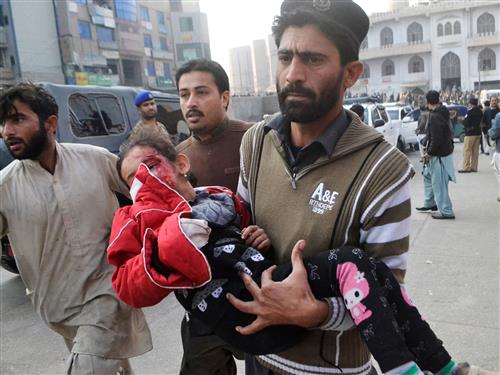 Dozens of children have been killed and hundreds more taken hostage after Taliban gunmen and suicide bombers attacked an army-run school in Pakistan.

At least 130 people were killed Tuesday in a Taliban attack on an army-run school in northwest Pakistan, officials said.
Two provincial ministers gave the new death toll. The majority of those killed were school children.

More horrifying details emerging from inside the school. An unnamed military source told US television network NBC a teacher was burned alive.

“They burnt a teacher in front of the students in a classroom,” he said. “They literally set the teacher on fire with gasoline and made the kids watch.”

Shireen Khalid Wadud told the BBC that her friend’s 13-year-old daughter was at the school when the gunmen burst in. “She pretended to be dead,” she said. “When the gunmen left the class, she ran and managed to escape.

“She was the only person who could escape from the class…She is wounded in her leg, but fortunately it is not serious. She is in hospital. She is very panicked and she is frightened.”

The Taliban launched the attack in revenge for an anti-terrorist operation launched by Pakistan’s army, targeting the school because of its military association.

“We selected the army’s school for the attack because the government is targeting our families and females,” said Taliban spokesman Muhammad Umar Khorasani. “We want them to feel the pain.”

Up to 500 children and teachers are reportedly being held hostage inside but some have managed to escape.

Hospitals in Peshawar have appealed for blood donors as they face shortages treating the children. One of the students who survived the Army Public School attack said that the terrorists had “foreign accents” and were talking in Arabic, according to the regional government.