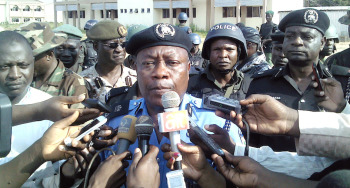 “A man driving a Toyota Sienna drove into the filling station as if he was going to buy fuel. The vehicle exploded causing six deaths, including three policemen,” the Kano state police commissioner Adelenre Shinaba told reporters.

“It is obviously a suicide attack,” he said of the blast in the Hotoro area of the city and blamed “the terrorists we’ve been battling”, referring to Boko Haram Islamists.