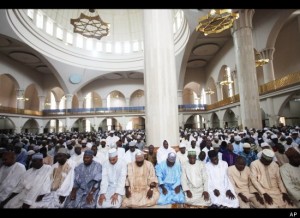 A group known as the Muslim Media Watch Group Tuesday commended President Goodluck Jonathan for signing into law, the bill against same-sex marriage in Nigeria.

In a statement issued by the group in Abuja, the signing of the bill into law by President Jonathan on Monday was a welcome development to all Nigerians both Muslims and Christians.

Alhaji Ibrahim Abdullahi, the MMWG National Coordinator, said, “The signing of the bill into law by President Jonathan tallies with the disapproval of the ungodly act by generality of Nigerians irrespective of religious beliefs.

The statement reads, “Jonathan’s action had met Nigerian’s age-long desire to have a legal weapon to fight the minute satanic agents illegally indulging in the act in the country and in particular, putting at bay, efforts of any interest that may want to promote it in Nigeria.”

It called on the government to publicise the bill and enforce its provisions strictly against any offender.

If you missed the story, READ HERE