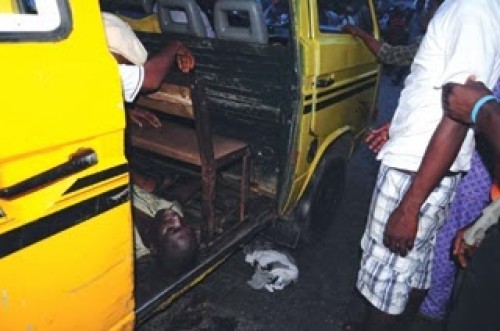 An unidentified soldier, yesterday morning allegedly beat a bus conductor (names unknown) to death at Obalende in Lagos, for insisting that the soldier who boarded his vehicle must pay his fare.

According to reports, the unidentified danfo driver with vehicle number LSD 451 XG was pounced on by the soldier who was in a mufti following a heated argument over transport fare.
Eyewitnesses say the man had accompanied his wife to the park at Obalende to get a bus to her destination.

Within a moment, the late conductor and the woman, exchanged hot words over transport fare.

That made the unformed man to react. He lost his temper and kept beating the guy, until he died,” one account said.

He was said to have dragged the deceased, raining blows on his head, stomach and chest.
On noticing he had given up the ghost, the soldier, it was learnt, attempted to run but commuters and passersby who witnessed the beating arrested him and told him to carry the corpse to the hospital.

Sensing that the soldier was about to be mobbed, a policeman at the scene phoned his colleagues at the Kam Selem Police Divisional Headquarters, Moloney Street and four police patrol vehicles with policemen arrived the scene.
A detachment of armed soldiers from nearby Dodan Barracks also arrived the scene to prevent the culprit from being killed by the mob.

The soldiers took away their colleague and the corpse to their barracks after dispersing hundreds of people asking for the soldier’s blood.

President Jonathan Cuts Down On Feeding Bill By N494 Million