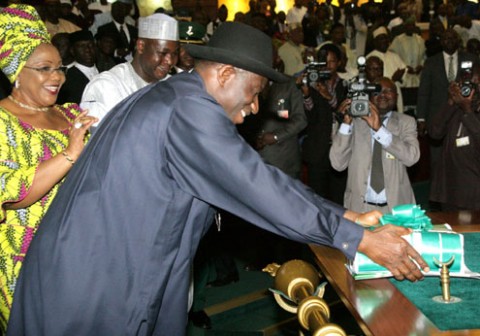 Premium Times reports that President Goodluck Jonathan has made a hug decision to spend less on food and consumables at the presidential villa in 2014.

The budget has come under an intense media scrutiny, President Jonathan has given up nearly half of the presidency’s giant feeding bill of N1 billion, a proposal, two years ago, that shocked Nigerians and stirred public anger.

The feeding cost has been lowered by N494 million or 45.5 percent in the 2014 budget proposal sent to the National Assembly by the president.

The 2014 request, if approved by lawmakers, will be the lowest amount of naira spent by the State House on feeding and allied costs in two years.

The government has also lowered the feeding bill for the first and second families and their offices, raising the question how the huge 2012 bill may have been utilized, since the same purpose is now being served at a cheaper rate.

Related Topics:Goodluck Jonathan2014 budget
Up Next

Bus Conductor Killed By Soldier Over Transport Fare In Lagos