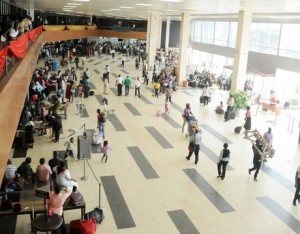 The Federal Government has barred airlines from flying into the Maiduguri airport until March 2014, this is contained in a Notice to Airmen sent by the Nigerian Airspace Management Agency to airline operators.

The Federal Government decided to shut the airport after Boko Haram insurgents destroyed some equipment belonging to NAMA and military installations. Maiduguri, the Borno State capital, was on December 2 attacked by Boko Haram insurgents, leading to the death of two military personnel and members of the sect, and the destruction of three decommissioned military aircraft, two helicopters and property worth millions of naira.

Operators have been told that the airport would no longer be available for flights until March 2014.

In the NOTAM, which was filed through NAMA’s Aeronautical Information Services, and sent to some Control Towers across the country, pilots were informed that the Maiduguri airport was shut during the first week of December and would not be available until early March next year.
The Federal Airport Authority of Nigeria spokesman, Mr. Yakubu Dati, told PUNCH newspaper on Monday that the airport had been opened.

He said the Maiduguri airport was just closed for a day following the Boko Haram attack on the nearby Air Force base and had since been re-opened.

But findings revealed that the airport had yet to be reopened. Arik Air said it had yet to resume operations to the Maiduguri airport because the airport was still closed.

Early this year, domestic airlines operating flights into Kano, Maiduguri, Yola and other volatile cities the North had announced plans to stop flights into the cities due to security concerns.

The development came a few months after some of the domestic carriers cancelled night-stops for their crew and aircraft in extremely volatile northern cities, especially Maiduguri.

The security situation had forced the foreign airlines to stop night stops at the Abuja airport.

Related Topics:SecurityAirportair travellers
Up Next

President Jonathan Cuts Down On Feeding Bill By N494 Million