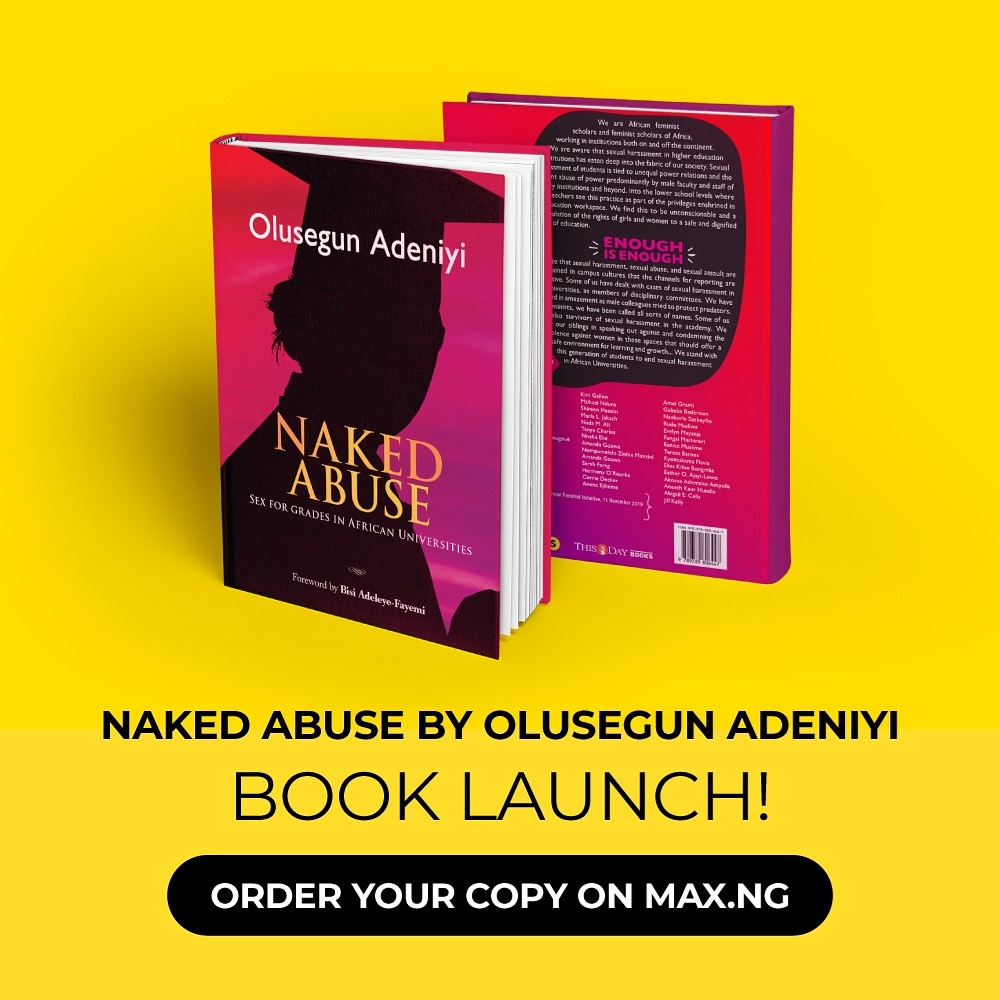 He has instead decided to donate the books to institutions at zero cost and here’s why..

In April 2020, Mr Adeniyi wrote and released a book, “NAKED ABUSE: Sex for Grades in African Universities’ to address the issues around sexual and gender based violence specifically in institutions of learning across Nigeria in partnership with MAX.NG.

Nigerian writer, OluTimehin Adegbeye had tweeted at Mr Adeniyi, calling his attention to the book about sexual abuse in Nigerian institutions Friday, June 26, 2020.

Ms Adegbeye wrote, I’m actually really curious, @Olusegunverdict, about why you thought it was okay to reprint a feminist statement denouncing sexual abuse on campus on the cover of your book about the same subject—without getting permission from the feminists whose names are attached to it?

Adegbeye added, “Feminists like @shailjapatel and @wunpini_fm put so much work into this statement. Only for a man to slap it on the back of his book, which is ostensibly about consent, with zero consent. Our names being on the book implies we endorse it. We didn’t even know it existed”.

“Gender justice is a struggle for everyone. We all have much to learn and unlearn,” the statement by the Chairman, THISDAY Newspaper editorial board, 27 June, 2020 reads in parts.

The members of the African Feminist Initiative some of who were displeased, tweeted at the author, Mr Adeniyi – they said they never granted the author the permission to print their publicly issued statement.

But in the four paragraph statement, Mr Adeniyi wrote; “I will withdraw all copies of the book from circulation and distribute them free to academic institutions and NGOs involved in the area of combating sexual violence against women and girls”.

Mr Adeniyi, a former spokesman to Nigerian President Umaru Musa Yar’adua Saturday, has also promised to remove the reference to the “AFI statement in any subsequent editions”.

“Fortunately, aside 250 copies given to an Abuja bookshop and 36 copies sold in Lagos during the lockdown by MAX, the 5,000 copies printed are yet to be distributed for sales nationwide, his statement reads in parts..

In his apology, Mr Adeniyi said he would like to appreciate all the honest “feedback regarding the subject and the back page of my book: ‘NAKED ABUSE: Sex for Grades in African Universities’. It has been a learning experience”.

His statement continued, “Yesterday, I sent my profound apology to the African Feminist Initiative (AFI) for the use of a portion of their statement and names of signatories at the back of my book without first seeking their permission. While I had taken the text from their public statement (two out of ten paragraphs) on grounds of Fair Use and proper attribution, I understand that not securing permission to include their names in the manner that I did undermines the concept of consent, which is a key message of the book. It is an error I truly regret. I have also reached out privately to some members to explain that I respect them and their work”.

Regarding the insinuation he ‘relied on’ someone else’s work, “let me state for the record that the research for the book started in 2018, following the conviction of Professor Richard Akindele at the Obafemi Awolowo University, Ile-Ife.”

He continued, “That was almost a year before the BBC Documentary on the same issue was aired in September 2019. And the title of the book remained the same from conception to publication. My intention was always to contribute my voice and platform to the campaign to end all forms of violence against women, including sexual violence. It has never been to take advantage of it.”