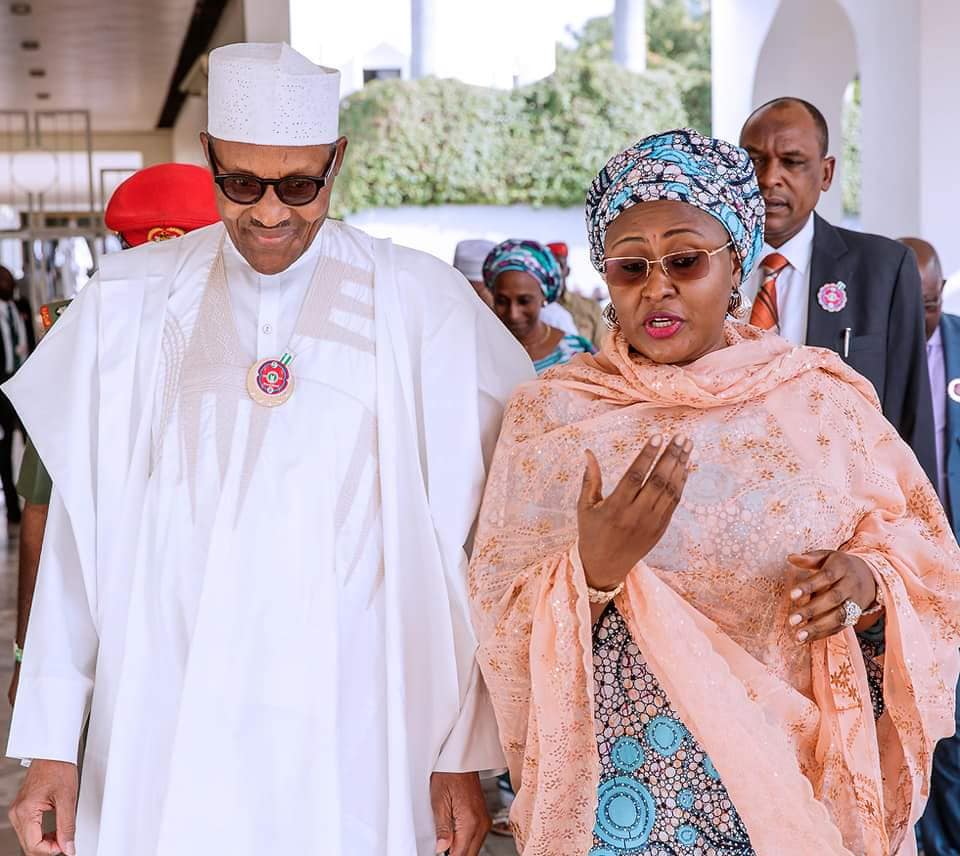 It was reported Saturday across National dailies in Nigeria that while attempting to force President Muhammadu Buhari’s nephew and personal assistant, Sabiu Yusuf, to go into self-isolation for traveling out of Abuja recently – the First Lady and her aides started shooting in the Villa.

The altercation led to at least two gunshots being fired within the sacred precincts of the presidential seat of power, a dangerous escalation of the crisis of confidence between the First Lady and the president’s other relatives in the struggle for control of access to the president. Yusuf was said to have managed to flee the scene with blood stain injuries sustained during the attack.

But Mr Garba Shehu, the Spokesman to the President in a statement June 14, 2020 says, “The Presidency wishes to acknowledge concerns expressed by several members of the public regarding the recent incident among the occupants of the State House which escalation led to the arrest of some staff by the police,”.

Mr Shehu wrote in parts, “This is to assure everyone that the President and Commander-in-Chief of the Armed Forces, @MBuhari, is not, and was not at anytime in any form of danger arising, either from deadly infections or the reported incident by security personnel which is currently under investigation”.

He said this particular incident happened outside the main residence of the President.

The statement added, “Armed guards and other security personnel assigned to the State House receive the necessary training of especially weapons handling and where they come short, their relevant agencies have their rules and regulations to immediately address them”.

“That a minor occurrence is being used by some critics to justify attacks on the government and the person of President Muhammadu Buhari beggars belief. In this particular instance, the President says the law should be allowed to take its course”, Shehu concluded.

THISDAY findings revealed that trouble started on Thursday night, when the first lady and three of her children: Zahra, Halima and Yusuf, accompanied by some of her security aides, led by Shugaba, stormed the residence of Yusuf, House 8 and one of the president’s guests houses, by the Pilot Gate of the Presidential Villa, insisting that Yusuf should proceed on self-isolation for 14 days, to save the president’s family from the danger of Covid-19.

Yusuf had four days earlier returned from Lagos after visiting his wife, who was recently delivered of a baby.
The situation, however, went out of control, when the First Lady’s ADC, in his attempt to apprehend Yusuf, popularly known as Tunde (having been named after Buhari’s former Chief of Staff, Supreme Military Headquarters, Tunde Idiagbon, when he was head of state in the 1980s), discharged his weapon in the premises.

The gunshots, which were described as ‘security breach,’ in the Presidential Villa, forced Yusuf to scamper to safety and eventually taking cover in the nearby house of his uncle, Mamman Daura, also Buhari’s nephew.

What snowballed into that terrifying moment in the Presidential Villa that night, it was learnt, was the fallout of four days of insistence by Aisha that Yusuf should self-isolate after returning from his Lagos trip.

The encounter was said to have degenerated into a heated argument as Sabiu insisted that he was not the only aide of the president, who had travelled to Lagos, citing the case of the new Chief of Staff, Prof. Ibrahim Gambari, whom he claimed has been going to Lagos every weekend, without anybody pressuring him to self-isolate.

He was also said to have made reference to the trip embarked upon by Aisha’s daughters, Zahra and Halima, when they visited their in-laws following Halima’s husband uncle, who passed on recently without proceeding on self-isolation.

Sabiu, it was alleged, was resisting pressure to go on isolation because the president had asked him to continue with his duties and described the attempt to force him into self-isolation by the president’s wife as double standard.
He later returned home after the arguments on the night of the incident, believing the conflict had been resolved. But he was wrong.

Shortly after getting home that fateful Thursday, the first lady along with her children, stormed his premises, allegedly raining abuses on him, then, followed by gunshots fired by Shugaba, which forced him to beat a retreat and ran to Daura’s place, where he spent the night.

Breaking: Resident doctors in Nigeria embark on nationwide Strike in the middle of a global pandemic