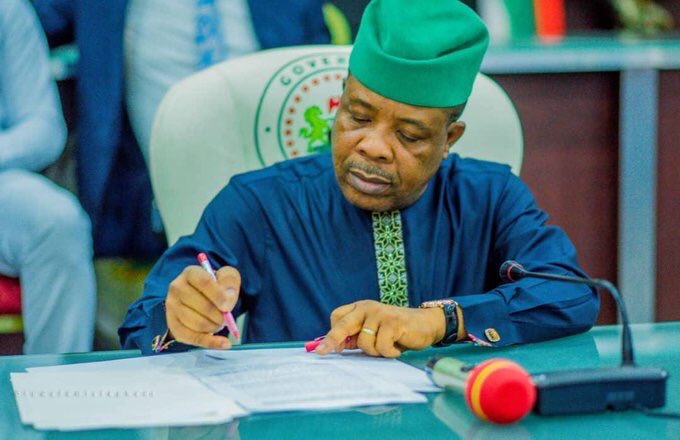 Emeka Ihedioha has reacted to the supreme court verdict on his application for a review of the judgment sacking him as Imo state governor.

In a statement on Sunday, Ihedioha said it was disheartening that the desire of Imo people to have good governance had been halted.

He expressed concern over the implications of the judgment on the future of Nigeria’s “democracy and the right of the electorate to have their votes count”.

He wrote, “let me leave them with the immortal words of the late journalist, Dele Giwa: “No evil deed will go unpunished; any evil done by man to man will be redressed; if not now then certainly later; if not by man, then by God for the victory of evil over good is temporary’.”

“This is certainly not the outcome we wanted or we worked so hard for and I know how disappointed you must feel,” he said.

“I therefore feel a sense of pride and gratitude for the wonderful energy and commitment that we deployed together to secure the mandate that has now been brazenly stolen from us.

“Whatever may be the personal injury I suffer as a result of the miscarriage of justice, my main concern in this whole tragic episode is not about me.

“If institutions that are critical to the entrenchment of rule of law could thwart the wishes of the people in a cynical manner, where lies the future of our democracy? That was why I sought a review of the Supreme Court judgement.”

He thanked all who stood up to fight “the miscarriage of justice”.

He said: “I must thank members of the diplomatic community for voicing their concerns for the stability of our country. I commend the Chairman and Members of the Peoples Democratic Party (PDP) for their vanguard role and leadership during this period.

“These are people unknown to me personally but who could not bear the illogic of turning number four to number one on the basis of a fraudulently procured result, and appealed to the Supreme Court to save itself and our judiciary.”

He added that it was a great privilege to serve the people of Imo state.

“On a personal note, I accept trials and difficulties as part of life as they enable one to become wiser and more sympathetic to the plights of others in similar circumstances. But I am firmly resolved NEVER to give up on the struggle for a better Imo State. And for a better governed Nigeria,” he said.

Ex-President Jonathan has hailed the strength and resilience of women