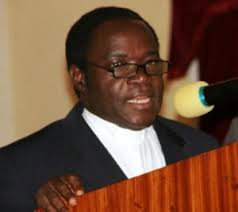 The Bishop of Sokoto Catholic Diocese, Bishop Matthew Kukah,  on Tuesday hit the President, Mohammed Buhari  hard – during his sermon at the Good Shepherd Major Seminary, Kukah in the Chikun Local Government Area of Kaduna State before the burial of  Michael Nnadi,  a seminarian, who was killed by kidnappers.

The cleric assessed the Buhari regime and concluded the President had not only relegated the national interest to the background, but he had also introduced nepotism to the military.

He said under Buhari, it was important for any Nigerian to be a northern Muslim before he could hold any strategic position.

“The impression created now is that to hold a key and strategic position in Nigeria today, it is more important to be a northern Muslim than a Nigerian.”

He said the nation was at a crossroads and its future hung precariously in the balance.

Kukah stated, “Our nation is like a ship stranded on the high seas, rudderless and with broken navigational aids. Today, our years of hypocrisy, duplicity, fabricated integrity, false piety, empty morality, fraud and Pharisaism have caught up with us. Nigeria is at a crossroads and its future hangs precariously in the balance. This is a wakeup call for us.”

He added that Buhari remained the only President in the history of the country that had run the “most nepotistic and narcissistic government in known history.”

Kukah said, “Today, in Nigeria, the noble religion of Islam has convulsed. It has become associated with some of the worst fears among our people. Muslim scholars, traditional rulers and intellectuals have continued to cry out helplessly, asking for their religion and region to be freed from this chokehold. This is because, in all of this, neither Islam nor the North can identify any real benefits from these years that have been consumed by the locusts that this government has unleashed on our country.

“The Fulani, his innocent kinsmen, have become the subject of opprobrium, ridicule, defamation, calumny and obloquy. His North has become one large graveyard, a valley of dry bones, the nastiest and the most brutish part of our dear country.

“Why have the gods rejected this offering? Despite running the most nepotistic and narcissistic government in known history, there are no answers to the millions of young children on the streets in northern Nigeria, the north still has the worst indices of poverty, insecurity, stunting, squalor and destitution.”

Kukah said the persecution of Christians in the North was as old as the modern Nigerian state.

He stated that Nigerians had been told that insecurity in the country had nothing to do with religion. He asked, “Really? It is what happens when politicians use religion to extend the frontiers of their ambition and power.

“Are we to believe that simply because Boko Haram kills Muslims too, they wear no religious garb? Are we to deny the evidence before us, of kidnappers separating Muslims from infidels or compelling Christians to convert or die?

“If your son steals from me, do you solve the problem by saying he also steals from you? Again, the Sultan (of Sokoto, Sa’ad Abubakar) got it right: let the northern political elite who have surrendered the space claim it back immediately.”

The cleric said with the current situation, Nigeria was not worth dying for. He stated, “Nigeria is at a point where we must call for a verdict. There must be something that a man, nay, a nation should be ready to die for.

“Sadly, or even tragically, today, Nigeria, does not possess that set of goals or values for which any sane citizen is prepared to die for her. Perhaps, I should correct myself and say that the average office holder is ready to die to protect his office but not for the nation that has given him or her that office.

“The Yoruba say that if it takes you 25 years to practise madness, how much time would you have to put it into real life? We have practised madness for too long.”

Voices are being silenced in Nigeria – Senator Shehu Sani