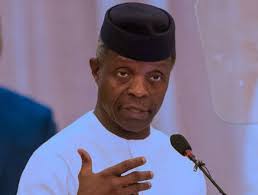 Vice President, Professor Yemi Osinbajo, has said that the helicopter crash which he was involved in last year has greatly strengthened his faith.

Professor Osinbajo stated this during the thanksgiving service at the villa chapel in Abuja, celebrating his survival and 11 others from tragedy a year ago.

The Agusta Westland W 139 helicopter conveying 12 of them crashed in the Kabba area of Kogi State during 2019 the presidential election campaign.

Professor Osinbajo was accompanied by his wife, Dolapo, family members and his aides, including some of those who were with him when the accident occurred.

He explained that the incident was so miraculous and despite the crash, none of the occupants had a scratch.

“What happened on that occasion was so amazing, so miraculous; 12 of us in the helicopter, the helicopter crashed and not one scratch on one of us, that’s just incredible.

“So we can only continue to thank God and to praise the Lord Jesus Christ for the awesome deliverance of so many of us.”

He asked “can you imagine a situation where you survive a helicopter crash? Adding that he thinks it “just demonstrates that God is merciful, God is awesome, he is able to do all things and he is able to do everything.

“I think it just greatly strengthened my faith and the faith of all of us who were there,” he stated.

The chopper managed by Caverton helicopter had managed to land at the township stadium before its propeller suddenly pulled off to the surprise of supporters of the All Progressives Congress (APC) who had gathered to welcome the Vice President.