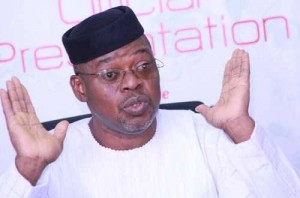 Segun Oni, former governor of Ekiti and an aspirant in the recent governorship primary of the All Progressives Congress (APC), has threatened to leave the party.

Addressing journalists in Ifaki-Ekiti, Ekiti, on Tuesday, he said his supporters in the party are being harassed.

Oni came second in the primary which was won by Kayode Fayemi, minister of solid minerals development.

He said although he has been “receiving pressure” from other parties to join them, he had decided to remain in the APC despite the loss.

Oni, however, added that there is a purported plan to sideline his supporters if Fayemi wins the state’s governorship election, an action that may make him quit the party.

“The contest was not about me. Our people must learn a new lesson that when you enjoy goodwill and you lose a primary, the next thing is for you to move to another party, with a thinking that you will win,” he said.

“[But) I have a responsibility to protect my supporters. This habit of winners take all and what we are hearing that Segun Oni’s boys will be in the cooler for four years if APC wins is what I won’t tolerate.

“We are not scavenging, neither are we scavengers. We have been receiving pressure from different parties that we should come for the tickets, but we said no, because we want this to be an example and become a new thinking that when you lose the primary, you must stay in your party even when you are popular.

“But if they continue to harass my supporters, I may quit the party, because I have the responsibility not only to protect them but to ensure that they are not taken for a ride.”

2019 And the Politics of Campaign Finance