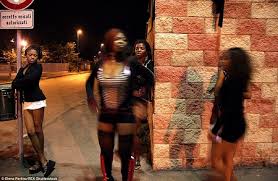 The temperature is just above freezing, but they are wearing shorts and strappy tops, burning open fires to warm themselves in the icy night air.

Most stand alone, breaking away from their position only to flag each passing car.

The women vying for customers on these streets are just some of the wave of Sub-Saharan migrants trafficked to Europe in hope of a better life.

In 2016, around 11,000 Nigerian women arrived in Italy by sea according to the International Organization for Migration. Most are at risk of becoming victims of prostitution, the IOM says, a gruesome end to a journey during which many endured rapes, abuse, and a dangerous Mediterranean crossing in flimsy rubber boats.

One of them is 17-year-old Becky, who set off for Europe from Nigeria’s Edo State when she was 15. An orphan raised by a foster family, Becky worked as a maid for a wealthy woman in Nigeria, but dreamed of becoming a doctor. Her boss’s daughter lived in Europe and Becky was charmed with stories of a better life there.

“She told me, when you come to Europe you’ll have opportunity, you will go to school, everything is going to be OK for you,” Becky says, sitting on the edge of a bed in a shelter in northern Italy for trafficked female migrants.

“She said you can do whatever you want, the world there is very free. I was like, wow, that would be great. And she said, OK, maybe my sister can bring you. I was so happy, I wanted to go to Europe,” she adds.

Becky says her journey took her across Niger and into Libya, where she was held in a detention center for five months. She suffered repeated rapes at the hands of her jailers, who she says were Libyan militias.

“It was the worst experience of my life,” Becky says. Her voice shakes as she describes how her attackers would slap her to wake her up, and sometime rape her in front of other migrants in the communal hall they all shared.

“You scream, you shout, but nobody comes to the rescue. They rape you, they do whatever they want to do to you, you have no say, you have no choice,” she says.

After her trafficker paid a ransom to her captors Becky was freed, but her ordeal was far from over. She was pregnant, but says she lost her baby after being given a liquid to drink by her smuggler.

“I don’t even know how it happened,” she said. “All I know is I was given a bottle of water and then I started bleeding. I was in a lot of pain. It was so painful.”

There was no time for recovery; she was crammed into a dinghy with four other young women, eventually ending up in a migrant camp in Sicily. Eventually, her trafficker’s contact brought her to island capital Palermo. “I was hoping it was maybe a job. At that point I had no idea what was happening,” Becky says.

She now owed €35,000 to the people who trafficked her to Europe, and they forced her to work the streets to pay it back. “They dressed me up, they make my hair, they make me up. I didn’t even know what they were doing. They gave me a bag with condoms,” she says.

She says she was driven to the side of the road and ordered to bring back €200. “If a man sleeps with you the most he can pay is €30. Calculate how many men you have to sleep with to get that,” she says. “You pay, pay, pay, and it never gets finished.”

Becky says she refused to sell her body, and when she returned to her madam empty handed the next morning she suffered a vicious beating.

Eventually, the teenager managed to escape. She no longer works the streets and is now being looked after by Progetto Integrazione Accoglienza Migranti (PIAM) — a migrant rights charity run by a Nigerian trafficking survivor, Princess Inyang Okokon. The NGO has helped rescue 400 Nigerian women since its founding in 1999. PIAM has provided Becky, and the other young women who live in the shelter with her, with Italian lessons and training as ceramists in a small workshop.

How President Buhari Bought Over the Chibok Girls, Paid €3 million to Boko Haram for their Release