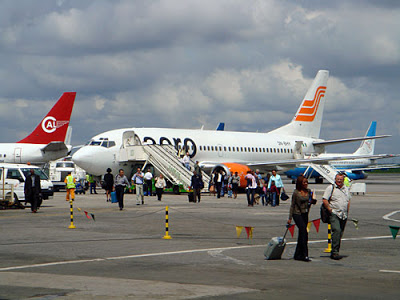 In a statement by its media consultant, the airline explained that it took the decision in order to cut huge personnel and other costs. It added that the airline was facing operational challenges that were worsened by the inadequacy of aircraft in order to keep all its workers meaningfully engaged.

The airline insisted that its issuance of redundancy notices to the affected employees was a business decision that would ensure Aero’s survival.

Aero’s statement added that the airline could not continue to employ more than 1,000 workers who had no job to do, stressing that the situation arose due to an insufficiency of serviceable aircraft.

“This is simply not sustainable for the airline. The huge monthly salary associated with a bloated workforce will eventually kill the airline, which is not the intention of the current government,” the airline’s media consultant stated. The airline’s statement added, “Aero Contractors currently has aircraft-to-employee ratio of 1:500, which analysts believe is perhaps the worst in the history of global aviation industry.” It continued: “Government’s intervention in Aero was to save it from total collapse. Therefore, all steps such as this (issuance of redundancy letters), to ensure its survival, must be put into consideration to save the airline.

“This decision will immediately reduce the whooping operational cost, which has been stifling Aero; enable the management [to] bring in more aircraft through savings from overheads, pay for C-checks as well as enable Aero [to] have a more manageable and committed workforce in line with international best practices of 50 to 60 personnel to one aircraft unlike what obtains in Aero at the moment.”

The airline’s redundancy letter, made available to reporters, told the affected staff that the company was constrained to lay them off as a result of operational challenges that culminated in the loss of business opportunities that adversely affected the airline’s finances. The letter also hinted at the possibility that the airline would review the layoffs in future.

The letter revealed that the airline’s decision had been communicated to the unions, adding that the company sought the unions’ understanding given the current operational difficulties.

The letter added: “While Aero appreciates your contribution to the company and continues to regard you as worthy ambassadors, we solicit your understanding as we struggle to stabilize operations and rebuild the company.”

The statement explained that staff attached to the Maintenance Repair and Overhaul (MRO) as well as other critical departments were not be affected by the redundancy notification. The company also stated that its Chief Executive Officer, Captain Ado Sanusi, and the management team would ensure that the affected workers would have access to their full gratuity and part of their pension to immediately cushion the effects of their job loss. The company noted that the sacked employees also stood a chance of being recalled as soon as Aero increases the number of aircraft in its fleet in the near future.

The airline’s statement emphasized that, before reaching its decision to terminate the staff, the management consistently explained the inevitability of redundancy notification to workers and the unions. It said there was no way Aero Contractors could carry on with its over-bloated personnel and huge overhead costs.

The airline assured its customers that the layoffs would in no way affect operations, promising that the exercise would rather enhance safety, reliability, and efficiency.

An aviation expert told our correspondent that Aero Contractors had been in murky waters for the past seven years. In 2011, the Asset Management Corporation of Nigeria (AMCON) took over the airline as a result of its massive debt to partners, financial institutions, and workers. In August 2016, the airline suspended operations for almost four months, only to resume skeletal operations in December. Even so, the airline, which was once regarded as one of Nigeria’s leading carriers, has failed to regain the impact it once had on the domestic scene. Besides, the airline has not been able to restart its long-suspended regional operations.

An investigation by SaharaReporters revealed that the airline currently has just two Boeing 737 aircraft, a far cry from the 18 it had in 2010. In February, Aero Contractors hired Captain Ado Sanusi, a former Deputy Managing Director of Arik Air, as its Chief Executive Officer.