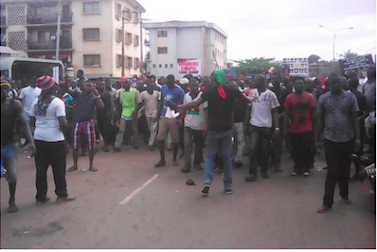 Early monday morning, protesters demanding the release of Nnamdi Kau have taken over the Enugu Police Station according to reports by residents.

The CPS Enugu( Enugu Central Police Station) the entrance have been taken over and barricaded by thousands of Angry Protesters chanting Anti Buhari and Nigeria songs. 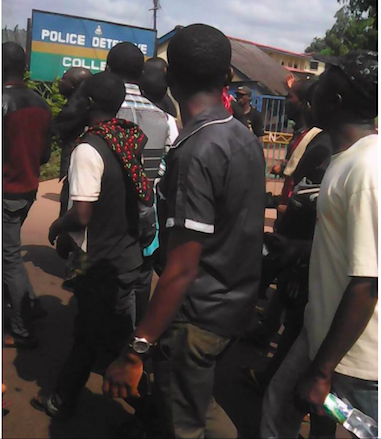 According to him, ”I got a call from Police authorities asking why my client should call people out on the streets for demonstration. This is happening in spite of four court orders I have secured and served to DSS instructing them to release my client who was granted bail since October 19.

“DSS has not given any reason for his continued detention. We have fulfilled his bail conditions. To worsen the matter,he is being detained in DSS facility instead of prison custody with access to his lawyer and personal physician. Nnamdi is being detained by an executive order. Its is a clash between judiciary and executive.

“I have not seen or heard any place where a court grants bail and the person is not released. Under UN and Africa charter, it is enshrined that once bail is granted, you release the person upon meeting the bail conditions. We are sliding to days of Decree 2 and 4 of 1984. This is pure dictatorship.”