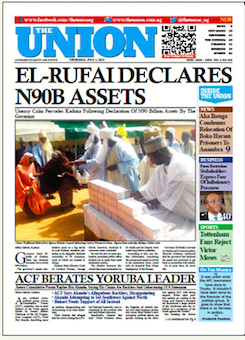 Governor Nasir El-Rufai of Kaduna State has declared his asset according to a report by the Union Newspaper….

According to the report, the Former minister of the Federal Capital Territory Abuja is worth N90 billion.

The governor’s assets declaration came as a big shock to most Kaduna residents yesterday as he allegedly declared ownership of 40 mansions, most of which are located in Abuja. Kaduna State Director Code of Conduct Bureau, George David, however, declined to comment when contacted.

According to him, any further information concerning the amount and assets involved in the declaration form, could only be enquired from Abuja headquarter of the Bureau.

Governor El-Rufai’s Adviser on Media and Communication, Muyiwa Adekeye, confirmed that the governor had declared his assets but promised to get back to journalists with details. As at press time, he never did.