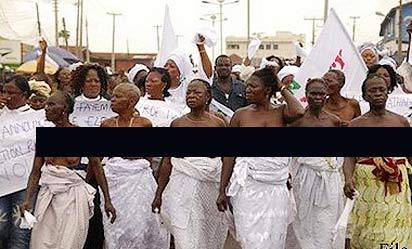 Angry women in Emure Ekiti have protested against the arrest of over 30 of their children by the Police in connection with the alleged attempt to burn the palace of Elemure of Emure Ekiti, Oba Emmanuel Adebayo, a retired Assistant Inspector General of Poilce and ex-Commissioner of Police in Lagos and Abuja.

It was gathered that the women, some of whom appeared half-naked on Wednesday, held leaves and sang hate songs against the monarch, demanding the release of their children.

Trouble started last Monday, when a group of angry youths of the community took to the streets to protest against power cut by the Benin Electricity Distribution Company.

They also complained against disruption of banking service from the only bank in the community for over seven months.

A resident, Olaoye Olayinka, said efforts by Oba Adebayo to stop the protest was met with stiff resistance by the angry youths who blocked the two entry points to the town.

“For the past seven months, we hardly have light 5 times in a month, and when they bring it, it was only in the mid-night when we would be asleep.

“Why this bad treatment from the electricity firm is so painful is because, of all Ekiti communities, Emure pays the highest bill, you can go find out about this. But still we are not enjoying the benefit, instead we are getting crazy bills for very bad service.

“The electricity firm slams us with N8,000, N6,000, N7,000 bills for each household, and for the artisans who are just welders, each of them get N15,000 a month. It’s ridiculous. And we have warned the boys coming to cut the power supply anytime they feel like,” Olayinka said.

The Commissioner of Police, Taiwo Lakanu, had told journalists that the youths were arrested for attempting to burn the king’s palace and for attacking the police station in the town.

“The Emure people protested against BEDC for disconnecting their light. What we disagreed with was the mode of protest. They became very violent; attacked the palace and the Police Station. We moved in and succeeded in quelling the violence. The area is calm now.

“We are screening those arrested and we have released some of them on bail. We are also looking at the case of arson which is not bailable because the palace was nearly set on fire.”

The Police Public Relations Officer, Alberto Adeyemi, told our correspondent on Sunday that those arrested had been released except five of them still under investigation.

“The remaining five are at the State Criminal Investigation Department assisting police in the investigation. They would be charged to court if found culpable depending on their level of involvement.”