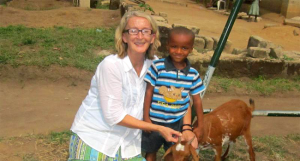 Kidnappers of an American woman working as a Christian missionary in central Nigeria are demanding for 50 million Naira ransom from the Hope Academy.

Rev. Phyllis Sortor was abducted from the Hope Academy compound around 10:00am on Monday in Kogi State.

“Early this morning we received a report that Rev. Phyllis Sortor, our missionary in Nigeria, was abducted from the Hope Academy compound in Emiworo, Kogi State, Nigeria by several persons,” the church said.

The Kogi State police command confirmed the kidnapping and said five gunmen, two of them wearing masks, scaled the fence bordering the missionary’s compound, fired sporadically and made off with her.

The missionary apart from running an NGO, is said to have secured a grazing land specifically for herdsmen in a move aimed at discouraging clashes between herdsmen and farmers.

Her stepson, Richard Sortor, told King5 at a prayer service at SPU on Monday night: “She believes in God, she’s doing God’s work.” He said the news was “surreal, just surreal, I can’t believe this.”

Rev. Phyllis Sortor has been working there for about 10 years.

In one of Sortor’s latest updates online there was no sign of distress. She came across upbeat, writing: “Just a little note to share the joy with you regarding the (long-awaited) opening of our brand-new (International Child Care Ministries) school in Enugu!”

A Bishop of the Free Methodist World Missions, David Kendall, in a statement on the Church’s website on Monday called for prayer for Rev. Sortor.

“The U.S. Embassy has been notified, and the State Department and the FBI are working with local authorities to find and rescue her. We are calling on the U.S. church to join together in prayer for Phyllis’ safety and speedy release,” the statement read.

No group has claimed responsibility for the act.

One Year Ago, School Students Were Gruesomely Murdered By B’Haram, Mostly Boys, We Remember Them Today #BuniYadi