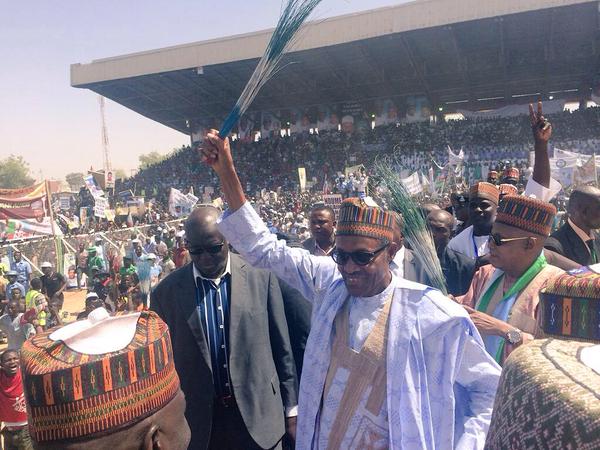 Sounds of gunshots charged the air on Monday at the presidential campaign rally of the All Progressives Congress (APC) in Maiduguri, Borno state, as security agents tried to control the wild crowd at the Ramat Square, venue of the rally.

The crowd hailed Muhammadu Buhari, presidential candidate of APC, as he arrived the venue in the presence of Kashim Shettima, governor of Borno state, and other top APC members in the state, after which he made his way to the podium. But he had hardly sat for 10 minutes when his security aides escorted him out of the venue for unknown reasons.

Angry to see him leave, the crowd went on rampage, attempting to force their way into Buhari’s convoy in a manner to prevent him from leaving, TheCable reports. At that point, his security aides began shooting into the air, while the crowd responded by pelting the soldiers.

Buhari’s campaign team had dithered over the choice of a date for his campaign rally in Borno due to security concerns.