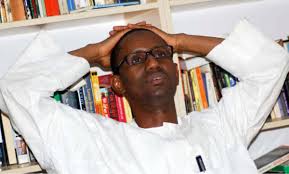 Sani Ribadu; the younger brother of former Economic and Financial Crimes Commission (EFCC), Nuhu Ribadu (pictured above) has been abducted.

Premium Times reports that Sani was abducted from his farm in Yola, Adamawa state on Sunday evening. The abductors abandoned their victim’s car at the spot where the operation took place.

Another brother of the anti-graft boss, Arabi Ribadu, told news online platform PREMIUM TIMES that Sani was kidnapped in his farm in Yola, the Adamawa state capital, on Sunday.

“He was abducted by gun yielding men in his farm along Fufore road at about 5:00 p.m. this evening,” he said, adding that, his abductors took away their victim and abandoned his car.

“Up till moment, there is no communication from them,” he said.

It would be recalled that Islamist sect, Boko Haram recently claimed Adamawa’s second largest town, Mubi. It is however unclear if it was members of the sect that abducted Sani Ribadu.

Myles Munroe Together With Wife & 7 Others Die In Plane Crash