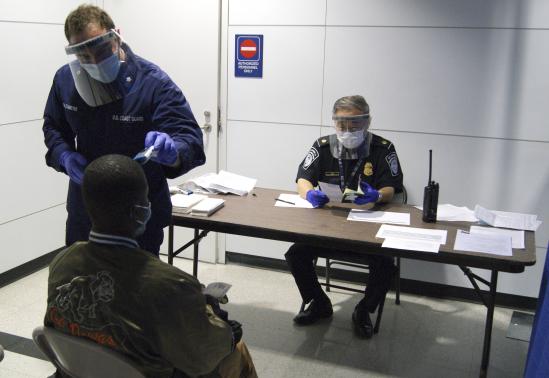 The Centers for Disease Control and Prevention has announced a new program to monitor the health of anyone returning to the USA from Ebola-affected countries in West Africa. The program will begin Monday in six states, then expand nationwide, said Thomas Frieden, director of the CDC, said Wednesday. Passengers will be monitored for 21 days, the incubation period for Ebola.

Countries in West Africa screen passengers before they leave their country. In the USA, airport staff also screen passengers as they arrive at any of the five airports that allow travel that originated in Ebola-affected countries — Guinea, Sierra Leone and Liberia.

Not everyone with Ebola will have a fever when they are at an airport, Frieden said. It’s possible for a person with Ebola to develop symptoms any time within 21 days of infection.

Public health staff will stay in touch with the travelers every day. States in the program will set up toll-free numbers for people to call if they are concerned about their own symptoms. Arriving travelers will get a thermometer and information about Ebola, Frieden said.

They will be asked to take their temperatures twice a day and report the results once a day, Frieden said. If someone doesn’t report, public health staff will track them down.

“If someone is ill, they will be isolated,” Frieden said.

Anyone at high risk for Ebola — such as if they were in direct contact with the bodily fluids of someone with Ebola — will be quarantined, even if they have no symptoms, Frieden said.

Nigeria used those measures to limit the spread of Ebola with great success. That country’s outbreak has been declared over after 20 cases and eight deaths.

The measures would most likely have detected the symptoms in Thomas Eric Duncan, a Liberian national who became the first person diagnosed with Ebola in the USA. Duncan was sent home from a Dallas emergency room when he first developed a fever, only to return days later with vomiting. He died Oct. 8.

As of this week, all 48 of his contacts have completed their 21-day observation periods. Two nurses who treated him developed Ebola.

About 150 people a day arrive in the USA from the three Ebola-affected countries.

More than 9,900 people have been infected with Ebola and more than 4,800 have died, according to the World Health Organization.

“Until we can stop the outbreak at the source, we can do lots of things to reduce the risk,” Frieden said. But until the outbreak in Africa is over, “we can’t get the risk to zero.”

Just In: More Abductions In Nigeria As 45 Girls Have Been Kidnapped In Madagali