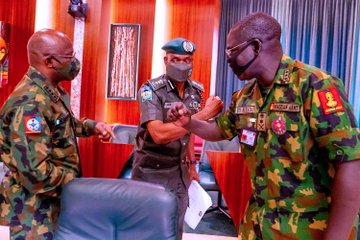 The senate and House of Representatives has asked President Muhammadu Buhari to sack the service chiefs.

The request by the lawmakers is coming six months after they had asked the service chiefs to resign.

Shettima had drawn the attention of senators to the killing of 45 farmers at Kwashabe village, about 20 kilometers north of Maiduguri, Borno’s capital.

Earlier, Garba Shehu, a presidential spokesman, said the nation’s service chiefs will remain in office as far as President Muhammadu Buhari is satisfied with their performance.

Shehu, who featured during an Arise TV programme on Monday night, said the calls for the sack of the service chiefs are “out of place”.

“I am not aware that the tenure of service chiefs is subject to any law or regulation that is clearly stated. They serve at the pleasure of the president,” he said.

“If the president is satisfied with their performance, he keeps them. And the buck stops on his table with all due respect to the feelings of Nigerians.

“The clamour for the sack if out of place considering that the president is not subject to the opinion of the opposition political party which has clamoured for this all the time.”

Over the weekend, NewsWireNGR reported that a total of 110 civilians were killed by Boko Haram in the attack on a rice field in Borno State according to the United Nations accounts.

Earlier reports had put the death toll of Saturday’s deadly Boko Haram attack on rice field in Borno at 43 while several others were said to be missing.

A statement by the United Nations Humanitarian Coordinator in Nigeria, Mr. Edward Kallon, on Sunday, while describing the attack as horrifying, said not less than 110 people were killed with many other persons injured in one the deadliest attack by the terrorist group, who have laid siege to the Northeast for over a decade.

Kallon said: “I am outraged and horrified by the gruesome attack against civilians carried out by non-state armed groups in villages near Borno State capital Maiduguri.

“At least 110 civilians were ruthlessly killed and many others were wounded in this attack.”