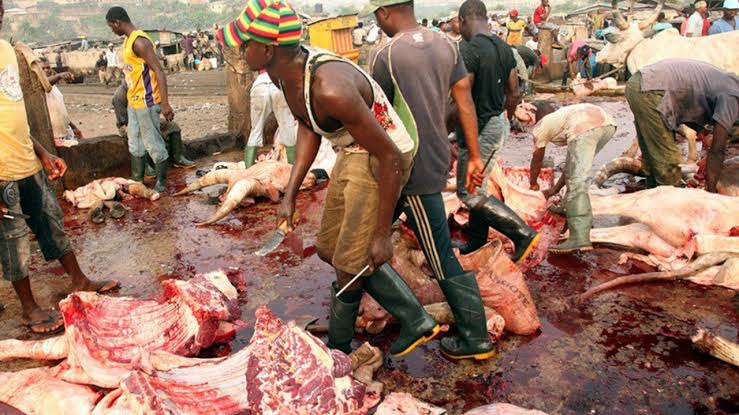 The Lagos State Government (LASG) says it will start  the dislodgement of illegal slabs as well as the monitoring of all veterinary premises from Sept. 1, across the state.

The State Acting Commissioner for Agriculture, Ms Abisola Olusanya, said this  on Sunday during the re-inauguration of the Monitoring, Enforcement and Compliance (MEC) Team of the ministry.

Olusanya said that the dislodgement was in furtherance of the sanitisation and reform of the red meat value chain.

She noted that the exercise would also involve the monitoring of meat transportation as well as stray animal control.

She added that the dislodgement is necessary especially as the state was particular about producing wholesome and healthy meat for its residents while simultaneously ensuring that the streets were free of stray animals.

She recalled  that  the dislodgement of illegal slaughter houses had been an on-going exercise for about three years now.

According to her, the need to strictly enforce meat transportation using only the designated vehicles and stray animals’ control which have  lately become more rampant cannot be over emphasised.

“The need for continuity and sustained effort against perpetrators of illegalities in the state informed the re-inauguration of the MEC unit by the current administration.

“You will agree with me that the menace of illegal slaughter slabs is rearing its ugly head in the state again with attendant negative public health impact on the over twenty million populace of our dear state.

“The government of Lagos State under the leadership of Gov. Babajide Sanwo-Olu seriously frowns at such public health risk to Lagosians, hence, the reconstitution of this unit,” she said.

Olusanya noted that the team would monitor the existence of illegal slaughter slabs as well as ensure proper regulation of veterinary activities in the state.

She added that the state would also monitor the activities of the Lagos State Private Veterinary Premises Registration Authority.

She also  said that all aspects of veterinary premises regulations, veterinary standards, compliance, monitoring and enforcement would be covered by the team.

She added that issues concerning transportation of live animals and meat from government approved abattoirs to the market would also be looked into.

The acting commissioner said that only the Eko refrigerated meat vans and the Eko live animals transport were  permitted to move meat from one place to another.

“The MEC team is also expected to monitor the standards of operations of all approved slaughter houses statewide in order to ensure compliance with professional best practices.

“The modes are the Eko refrigerated meat-vans and the Eko live animals transport.

“Its aim is to further sanitise the red meat value chain and improve the quality and wholesomeness of the meat consumed by the people,” she said.

Olusanya  also said that ongoing rehabilitation works were being undertaken in the 20 approved slaughter slabs in the state in a bid to improve their present states to meet international standards by converting some of these slabs to semi-mechanised abattoirs.

She said that the government had been monitoring and regulating the affairs of premises where veterinary activities such as treatment of animals, sales of drugs and biological activities take place.

She said that the menace of stray animals on major roads and streets was on the high.

She said that such animals, by destroying various ornamental plants, shrubs and trees of aesthetic value within the metropolis, had increased the risk of accidents and environmental degradation.

She said that the prevalence of the outbreak of zoonotic diseases which pose major threats to human health had increased.

“In addition, the team is also to monitor and control the menace of stray animals statewide by extensive intermittent raiding of these animals off Lagos metropolis.

“Lagosians should by this re-inauguration expect a better service delivery in terms of hygiene, safety and wholesomeness of meat products as only approved slaughter houses are to release duly certified and inspected meat to the populace.

“The standard of veterinary regulation and service delivery statewide will definitely be up scaled and maintained,” she said.

The acting commissioner said that since the inauguration of the stray animal control, several animals had been confiscated, owners fined to recover the animals while unclaimed ones were donated to orphanages within the state.