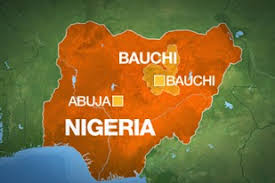 Some angry youths have impounded a police patrol vehicle allegedly been used to extort innocent travellers at Dambam, a rural community in Bauchi State.

They seized the patrol van after armed robbers brutally attacked and robbed some women who were travelling in the North-East axis.

Three little boys, who were together with their mothers, were seriously injured on their heads and faces.

The villagers, who paraded the police vehicle in a video obtained by PRNigeria, said they discovered a mobile phone inside the car belonging to one of the officers who fled, and also the car’s key.

Speaking in Hausa, they said that the vehicle, which belongs to Dambam Divisional Police, was allegedly been used by police personnel to assault and extort both commuters and residents, plying the road passing through their village.

They threatened to take laws into their hands if government fails to take action and deal with the errant security officers.

But in an unsigned statement  the Bauchi State Police Command, advised the general public to disregard the video, saying it was “totally unfounded, fabricated and mischievous”.

It said the clip, which has been circulated on social media platforms, is aimed at causing disaffection between the police and public.

The Police Command, added that it has launched a discreet investigation into the armed robbery incident and the purported video, promising that all findings would be made available to the public.