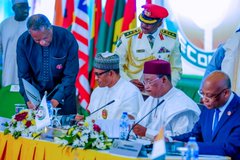 Buhari said this during a bilateral meeting with President of Cote d’Ivoire, Alhassan Quattara, on the margins of the 56th ordinary session of the Economic Community of West African States.

Buhari, according to a statement by Garba Shehu, Senior Special Assistant to the president on Media and Publicity, maintained that the instability in Libya was causing a recurring threat to the Sahel and Sub-Saharan Africa, expressing concern over the growing effect of the crisis on many lives.

He added that the fighters in Libya were surviving on violent crimes and terrorism.

The statement reads, “The President said the Libyan fighters, who were trained for the 43 years Muammar Gaddafi ruled the country were armed with deadly weapons and had been roaming the Sahel and Sub-Saharan region with no other skills for survival ‘but to shoot and kill.’

“President Buhari expressed happiness that neighbouring countries were supporting Nigeria in tackling the menace of the fighters who had teamed up with Boko Haram, adding that there was a need to do more by tWest African countries both under the ECOWAS platform and at bilateral levels.”