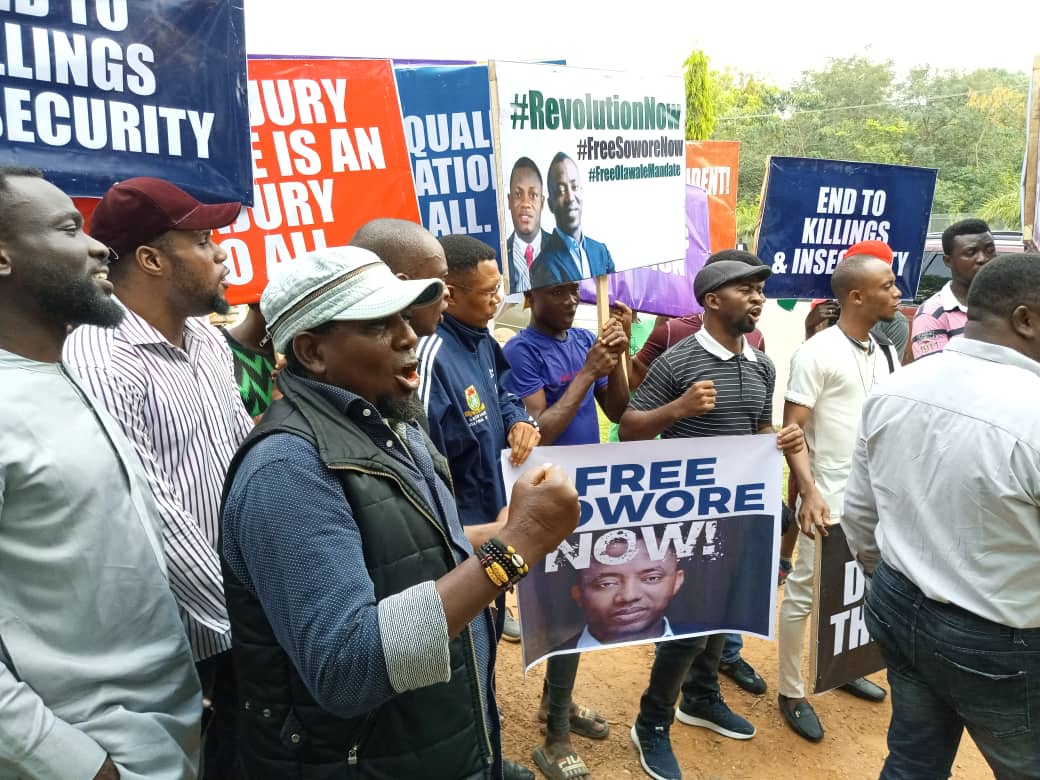 Officials of the Department of State Services (DSS) have dispersed protesters who stormed the headquarters of the service over the continued detention of the convener of the #RevolutionNow protest, Omoyele Sowore.

NewsWireNGR monitored activities of the protesters and online images where the protesters were shot at with live ammunitions at the premisses of the Department of State Security Services.

Sound of gunshots was heard at a #FreeSowore protest held in Abuja. In a video, journalists and protesters were seen running as multiple shots were fired.

Multiple sources confirm to NewsWireNGR that the Executive Director of Enough is Enough Nigeria, Ms Yemi Adamolekun was attacked during the protest by agents of the DSS.

“Her phone was seized and smashed. Arise camera crew also fled the scene after their camera was seized, journalists from Galaxy Television and other media houses were attacked and their cameras smashed”.

The protesters had stormed the DSS office on Tuesday morning but were met with resistance by the officials who then started shooting sporadically to disperse them. The actions of the protesters to storm the DSS premises demanding to receive Mr Sowore was in reactions to a statements by Public Relations Officer of the Service, Dr Peter Afunanya who said the service had been served the bail order, but were yet to release the accused because nobody turned up to receive him.

The Social Economic Rights and Accountability Projects, SERAP, in a series of tweets condemned the attacks on the Protesters and Ms Adamolekun of Enough is Enough Nigeria.

“We strongly condemn the violent attack on @_yemia by Nigeria’s security agents while peacefully protesting and demanding the release of Sowore & Bakare as ordered by the court. Authorities should end these ruthless attacks & reverse the deepening climate of fear faced by critics,” Statement reads in parts.

SERAP Continued, “We’ve seen a video footage apparently showing the use of lethal and excessive force by Nigerian security agents against peaceful protesters demanding the release of Sowore and Bakare as ordered by the court. We condemn the ruthless violence and shocking abuses against protesters”.

“The use of lethal and excessive force violates the very core of Nigeria’s constitution and international human rights obligations. This should end immediately, and those responsible should be held to account.”

Sowore is charged with two counts of conspiring to stage a revolution and to remove from office Nigeria’s president, Muhammadu Buhari, “otherwise than by constitutional means.”

Sowore is also charged with cybercrimes for “knowingly send[ing] messages by means of a press interview granted on Arise Television…for the purpose of causing insult…and ill-will on the…President of the Federal Republic of Nigeria” and for money laundering based on the transfer of $19,975 between a Nigerian bank account and a Sahara Reporters held account in New York.

Sowore pleaded not guilty to the charges, but the Federal High Court has granted bail to Omoyele Sowore with a bond of N100 million and two sureties in like sum, after meeting the bail conditions the state security agency is refusing to release him.