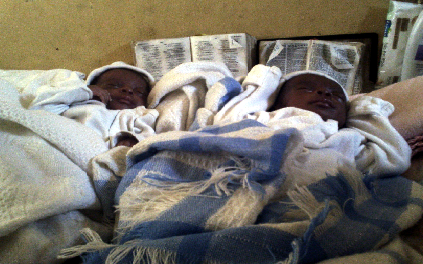 Seven weeks after she delivered a set of triplets, a housewife, Gloria Okore, has been detained by the management of a private hospital in Lagos over her inability to settle outstanding medical bills of N35,000 out of N120,000 incurred at the hospital.

Mrs Okore, who delivered two girls and a boy on May 10 in Bessylva Hospital and Maternity Home, located at 60, Surulere Street, Dopemu-Agege, Lagos State, has been begging for help to raise the balance and cater for the children.

Vanguard Newspaper reports that the babies were delivered preterm (seven months), and one of the triplets, a female, died two weeks ago as there was no incubator to use for the babies.

Gloria Okore said that due to the hash economic situation in the country, the family needed the goodwill of Nigerians to take care of the babies.

The nursing mother, who was looking pale and unable to breastfeed the babies, was using an unkempt ward inside the hospital with no medical facilities.

According to the 27-year-old Gloria, “I had the triplets through normal delivery, but the babies were born prematurely. We were charged N120,000. My husband hawks fairly-used clothes (okrika). It took him time to raise N85,000, which he paid in installments. “I am from Owerri in Imo State, while my husband is from Abia State. We got married three years ago. Before I had these triplets, I had twins who died immediately after birth.

When I was pregnant for the triplets, I was very sick; I could not walk long distance because my belly was very big. “I want government to help pay the balance of the hospital bills and also help us with basic necessities for the babies. Right now I cannot work because the babies are still young.”

One of Africa’s Foremost Writers, Elechi Amadi, Has Passed Away

Breaking: He And His Wives Invested As “Shareholders” In Dubai, FG Clears Army Chief Buratai