Nigeria’s online tabloid Saharareporters took to Facebook on Sunday to declare that Senate President, Bukola Saraki is not a Nigerian. The publication also accuses him of theft. 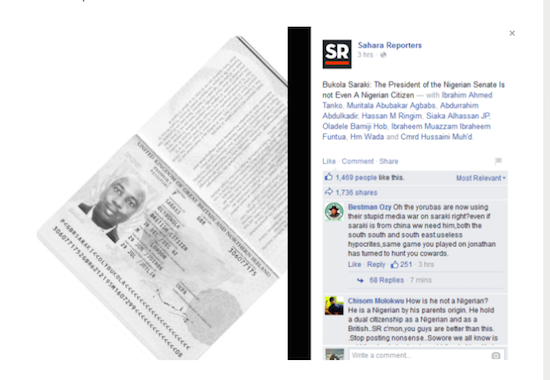 Even if @APCNigeria and. @AsiwajuTinubu sees Saraki Robbing Société General Bank, he is our Senate president pic.twitter.com/sRR8s06KYK

And we bring to you a summary of the top tweets by Nigerians in reaction to the claims made by Sahara....

“When Bukola Saraki decamped to APC, he was not a thief. now that is not with us, he is. Ooh Nigeria. Diaries God oo

When we said Sahara Reporters and co were used by Tinubu machinery for propaganda, some denied. They are using same against Saraki already.

Wait. APC propaganda has reached Bukola Saraki's citizenship? But when he was gathering votes in Kwara for Daddy Bubu he was son of the soil

Hmmm. The flashlights are on Bukola Saraki. Is he now in the bad books of the powerful lagos press?

Sahara Reporters is now telling us the obvious - a tool of Tinubu. Bukola Saraki's media team should brace up to this challenge.

Sahara Reporters are out in full force, ready to bring Bukola Saraki down.