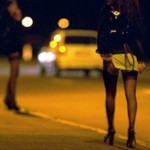 A 33-year-old woman, Blessing Uche, on Monday, June 8, 2015 appeared before an Ebute Meta Chief Magistrates’ Court in Lagos for alleged theft of N17, 800 and stripping herself Unclad in public to resist arrest.

The accused, who is facing a three-count charge of assault, stealing and resisting arrest, however, pleaded not guilty, reports the News Agency of Nigeria, NAN.

The Prosecutor, Cpl. Cyriacus Osuji, told the court that the accused committed the offences on June 6, at the Railway Line in Otto area of Lagos.

Osuji said that Uche, an alleged sex worker, stole the sum of N17, 800 from one Shaibu Umoru.

He told the court that the accused stripped her Unclad when the police came to her arrest, thereby frustrating them from doing their lawful duty.

“She stripped herself Unclad in public and caused public nuisance and disturbance,’’ he said.

The prosecutor said that the offences contravened sections 117, 173, and 285 of the Criminal Law of Lagos State 2011.

Chief Magistrate Olatunbosun Abolarinwa granted the accused bail in the sum of N50, 000 with one surety in like sum.

Abolarinwa adjourned the case to July 8 for mention.