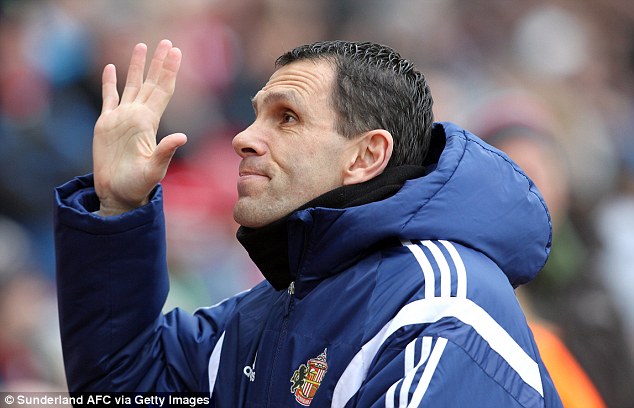 English Premier League strugglers, Sunderland have sacked manager Gus Poyet in the wake of Saturday’s humiliating 4-0 defeat at home to Aston Villa. The Uruguayan impressed in his first season, guiding the Midlanders to Premier league safety, but has seen them pick up just four wins in the League, all season.

The poor showing at the weekend, especially having conceded four before halftime, was probably the last, the club board could take. The team lost 4-nil to Aston Villa, without even a fight. The result leaves the Black Cats one point and one place above the drop zone and owner Ellis Short believes a change of manager is needed to avoid relegation.

Poyet – who leaves after 17 months in charge – was informed of the club’s decision having taken training at the Academy of Light on Monday morning.

It was reported earlier in the day that influential sporting director Lee Congerton had advised Short to sack Poyet. The South American’s position had become untenable after a breakdown in relationship with Congerton and the club’s fans, thousands of whom streamed for the exits with the team trailing by four at half-time against Villa.

A handful of supporters even tried to storm the dugout while some targeted the directors’ box – including chief executive Margaret Byrne – leaving the club hierarchy in no doubt that a change was necessary.

Holland boss Dick Advocaat has already spoken to the club about a short-term deal until the end of the season and he could be installed before Saturday’s trip to West Ham.

Congerton is close to Frank Arnesen – they worked together at Chelsea and Hamburg – and he is thought to have recommended Advocaat for the role.

A statement on the club’s website confirmed the news on Monday afternoon, in which Short said: ‘I would like to thank Gus for his endeavours during his time at the club, in particular last season’s ‘great escape’ and cup final appearance, which will live long in the memory of every Sunderland fan.

‘Sadly, we have not made the progress that any of us had hoped for this season and we find ourselves battling, once again, at the wrong end of the table. We have therefore made the difficult decision that a change is needed.’