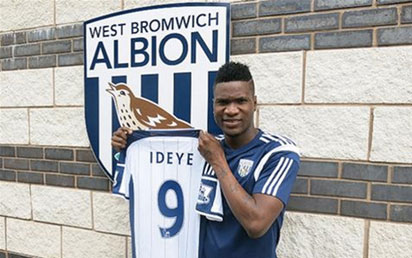 The 25-year-old signed a three-year deal with an option to increase it by a year. He has been given jersey number nine and is to play alongside his compatriot, Victor Anichebe.
“Brown is a quality striker and I’m looking forward to working with him,” head coach Alan Irvine told the club’s website
“He’s a strong, quick, powerful player who likes to get in behind defences and has plenty of Champions League and international experience,” he added.
Brown Ideye joins West Brom from Ukranaian side, Dynamo Kiev. He has played for Ocean Boys football club in the Nigerian League and also for clubs in Switzerland and France.

He was a prominent part of the Nigerian squad that won the African Nations Cup but was not selected for the World Cup.