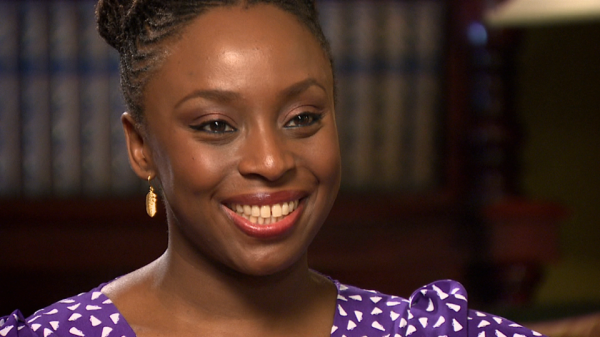 Chimamanda Ngozi Adichie is fast becoming more popular than rock-stars, and Hollywood Queens.She has been promoting her third novel which is already a bestseller, Americanah . Soon, she may be embarking on a promo tour for the movie adaptation of her previous novel, Half Of A Yellow Sun.

The 36 Years old beautiful Nigerian author sat down with Emma Brockes of The Guardian US.

They talked about being natural, race and of course, gender.

Excerpts of the interview below:

On gender in Americanah upsetting people

“I knew that was coming. I can’t write a book like that and then go, ‘Oh my God, they’re upset.’ But my intention wasn’t to upset. It’s just that I’m willing to if that’s what it takes to write the book.”

On gender in general

“Yes. When women do say something, not only is it more likely to be ignored, but the women themselves are accepting of it being ignored. So they’re less likely to push back. That happens less often in Nigeria. Women in corporate settings are more likely to be vocal…Because although there’s a lot of gender bullshit in Nigeria, I think women in the west have a lot more invested in being liked. And being liked if you’re female means a certain thing. So in workplaces, women who are bosses in Nigeria are fierce. The people who work for them, men and women, respect them. But, these are women who very keenly perform gender stereotypes when they go back home. And if they give a public interview, they have to say, ‘My husband supported me and allowed me to …’”

She shares her encounter with a carpet-cleaner while babysitting in Philadelphia. “I remember opening the door and his face was such a cliche; he looked at me and his whole face fell. You know: I can’t believe I’m working for a black person. And he had such an attitude. And then when I said, ‘Mrs So and So said you were coming’, he changed and suddenly was my friend.”

On her father reading Half of a Yellow Sun

“…I knew the novel would be good; I didn’t know it would be this good.’ And then he said thank you, ‘Our story has been recorded.’ I remember thinking, OK, it’s over. I don’t care what anybody else thinks. My father was central and he was so generous; I had used so many of his stories. It’s still very painful for him. And then writing it in a novel where people also have sex and scandalous things happen. I was like, oh my God, I don’t know what daddy’s going to think!”

On the Nigerian swagger

“We’re not popular in any part of Africa. And we’re rather proud of it. If I wasn’t Nigerian, I think I would understand why. There’s a kind of Nigerian aggressiveness … ‘Why shouldn’t we?’ We’ll do it very loudly and without much finesse, but hey. Inside Nigeria there are different cultures, but this is Nigerianness – it cuts across ethnic groups. I don’t know if it’s from our large size, I don’t know if it’s because we never had white people settle and stay. So Nigerians go to Kenya and Tanzania and we think, why are you so apologetic?”

On writing about love

True Federalism, Not Resource Control Our Position At The Confab — Edwin Clark