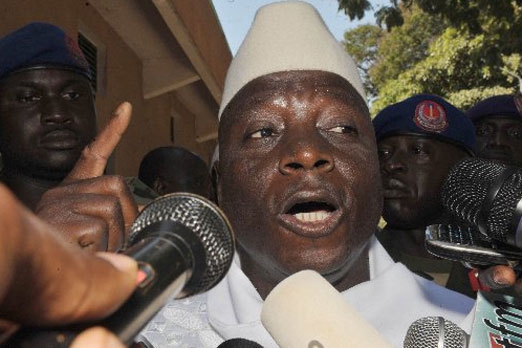 Gambian President, Yahya Jammeh has referred to gay people as “vermin”, saying they should be dealt with in the same way as mosquitoes which cause malaria.

President Jammeh made the comments on Tuesday. He has referred to gays as a threat to humanity in the past. A year ago he said that gay rights were a “great mistake” for Africa and that “human beings of the same sex cannot marry or date”.

“We will fight these vermins called homosexuals or gays the same way we are fighting malaria-causing mosquitoes, if not more aggressively,” he said in a speech to mark the country’s 49th anniversary of independence from Britain.

The Gambian president says his country would not accept aid from any country if the welfare of LGBT people is a condition.

“We will therefore not accept any friendship, aid or any other gesture that is conditional on accepting homosexuals or LGBT as they are now baptised by the powers that promote them,” he said.

“As far as I am concerned, LGBT can only stand for Leprosy, Gonorrhoea, Bacteria and Tuberculosis; all of which are detrimental to human existence,” he added.

Same-sex activity in Gambia is punishable by up to 14 years imprisonment.

Related Topics:LGBTYahya Jammeh
Up Next