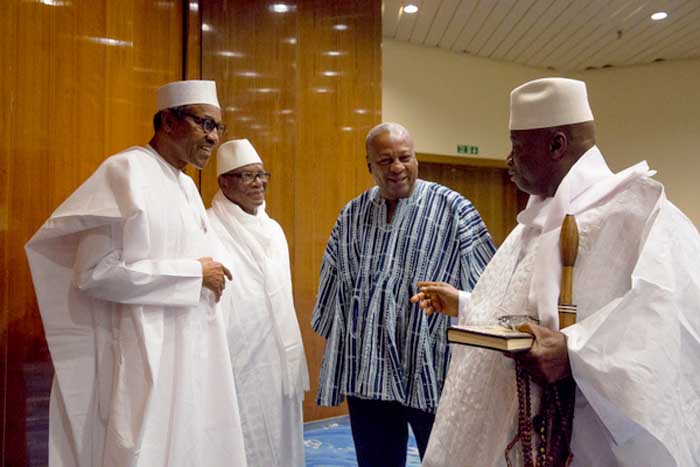 The curtain fell on the 22-year-reign of The Gambia strongman Yahya Jammeh Saturday night when Asiwaju Bola Tinubu’s leased Falcon 900 flew Jammeh and his family from the capital Banjul into exile.

Jammeh, his wife Zainab, mother and son Mohammed all wore mournful looks as they were being ferried out of Banjul into exile, according to sources close to the flight.

The four of them and Guinean President Alpha Conde were the only passengers on the leased jet, safe for the crew.

A cargo aircraft provided by the President of Chad, Mr. Idris Deby, was seen ferrying at least seven exotic cars, including Rolls Royce and Sports Utility Vehicles for the exclusive use of Mr. Jammeh, who is now in Malabo, Equatorial Guinea, shortly after a brief stop-over in Conakry, Guinea. President Conde of Guinea reportedly disembarked before Mr. Tinubu’s jet headed to Malabo, where Mr. Jammeh will, in the meantime, spend his post-office life as the guest of another sit-tight dictator, President Teodoro Obiang Nguema Mbasogo of Equatorial Guinea.

Besides the persuasive last-minute efforts of Conde and Mauritania’s President Mohammed Ould Abdel Aziz, it was important that there was an aircraft on ground to complete the mission.

Conde in whose custody Tinubu’s leased plane was came in handy.
Considering the tension the Gambian crisis had generated, Tinubu was reluctant to allow the trip. Eventually, he agreed after assurances that the aircraft would only be used to ferry Jammeh and his family into exile.

For Tinubu, the facilitation of the restoration of peace to The Gambia was paramount.

Contrary to a wild and unsubstantiated allegation that stolen monies were ferried out of the country on the flight, investigations by Bola Tinubu’s Newspaper, The Nation revealed the following.

“No such happened,” one of the sources said. “In fact, it was impossible for looted monies to have been taken away on an aircraft that was in public glare. The radar of the international media, security forces and Gambian people was on the aircraft.

“It is practically impossible to load millions of dollars on the plane. In any case, no money was loaded into the plane, safe Guinean President Conde, Jammeh, his wife, mother and son,” the sources said.

There were rumours that Jammeh took with him some $11 million. A BBC report said the cash was allegedly taken after Jammeh lost the December 1 election and Saturday. It did not say that it was taken in one tranche and flown out in the flight last Saturday.