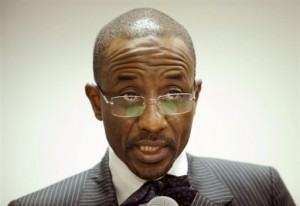 SaharaReporters has learnt that Nigeria’s Central Bank Governor, Sanusi Lamido Sanusi, will be forced to leave his post in March, 2014, two months before the formal expiration of his tenure. Two sources at the Presidency and a source at the Central Bank told SaharaReporters that Mr. Sanusi has been ordered to proceed on a post-retirement leave in March. All three sources concluded that the early exit for the CBN henchman was occasioned by Mr. Sanusi’s recent leaked letter to President Goodluck Jonathan detailing the theft of close to $50 billion in oil proceeds by the Nigerian National Petroleum Corporation (NNPC). Last week, Mr. Sanusi revised the figure of missing funds down to $12 billion, but the damage to the Jonathan Presidency is considered massive.

SaharaReporters learnt that Mr. Jonathan has concluded plans to speedily replace the CBN governor whom the president believes set out to embarrass his government. “[President] Jonathan thinks that Sanusi Lamido Sanusi has been making erratic pronouncements recently calculated to demean the office of the President,” said a source in the Presidency.

Presidency officials accused the CBN governor of leaking a private letter written to President Jonathan in which Nigeria’s chief banker complained about fraud perpetrated by officials of the NNPC and the Minister of Petroleum Resources, Diezani Alison-Madueke. Ms. Alison-Madueke is extremely close to the president and is believed to be the arrowhead of Mr. Jonathan’s corrupt schemes, especially in the oil sector.

One of the sources at the Presidency told SaharaReporters that, although Mr. Sanusi’s allegations were substantially accurate, the CBN governor was forced to back down from the more damaging aspects of his claims after the president’s associates threatened to make an issue of his reckless spending and philandering. “Once Sanusi found out that the Presidency was determined to deal with him, both through the media and by instigating the EFCC to look into his spending habits, he was willing to retreat and to accept an early departure,” said our source.

Shortly after the CBN governor was effectively blackmailed and brought under control, he appeared before the Nigerian Senate and reversed his position, claiming that the NNPC was only unable to reconcile $12 billion of crude oil sale earnings.

It was shortly after Mr. Sanusi’s Senate appearance that President Jonathan ordered that the CBN governor’s retirement should be fast-tracked. Mr. Sanusi, who is believed to nurse an ambition to become the next Emir of Kano, had publicly stated that he does not intend to stay for another term.

His term as Nigeria’s Central Bank governor is due to expire in May 2014.

Attacks On Barracks Is Victory From Allah – Boko Haram