Attacks On Barracks Is Victory From Allah - Boko Haram 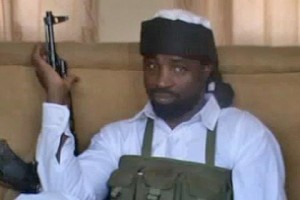 KANO (AFP) – The leader of Nigeria’s Boko Haram Islamists, Abubakar Shekau, has claimed a daring December 20 raid on a military barracks in the restive northeast, in a video obtained by AFP Friday.

The insurgents stormed the barracks in the town of Bama in a convoy of trucks before sunrise, opened fired on the soldiers inside then torched the compound. Several witnesses said the gunmen kidnapped soldiers as well as women and children.

“Our fighters stormed the Bama barracks,” Shekau said, while seated on a mat and flanked by a group of armed men.

Shekau has released a series of videos since taking control of the rebel group more than three years ago. The latest recorded statement was delivered to AFP through the same channel as previous messages.

“This is a victory from Allah,” said the wanted insurgent leader after claiming to have destroyed “21 armoured tanks” and killed “multitudes” in the raid.

The military has not released a death toll from the barracks attack and rescue agencies have largely been barred from working in the northeast since at a state of emergency was declared in the area in May.

According to the defence ministry, more than 50 “terrorists” were killed when ground forces backed by fighter jets pursued the fleeing Islamists after the raid.

Residents told AFP that an unknown number of civilians were killed and four villages destroyed during the military response.

Shekau has been declared a global terrorist by the United States, which put a $7 million (5.1 million euros) bounty on his head. Nigeria has separately offered 50 million naira ($300,000) for information leading to his capture or death.

In the video, Shekau appeared to mock the notion that one of his loyalists would betray him in exchange for a reward.

“What is 50 million naira? We do not worship money. As for those who are in our midst, Allah has taken care of them,” he said.

The Bama attack was the second major strike on the military in the northeast this month and was seen as a reminder that more than seven months into a military offensive aimed at crushing the insurgency, Boko Haram remains capable of striking high profile targets.

The group’s four-year insurgency, which seeks to create an Islamic state in Nigeria’s mainly Muslim north, has killed thousands.