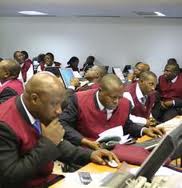 Equity transactions on the Nigerian Stock Exchange (NSE) opened after the holiday on Friday in an upward trend with the market indices growing by 0.94 per cent.

An analysis of the price movement chart indicated that Nestle recorded the highest gain to lead the gainers table by N14.90 to close at N1, 200 per share.

Ashaka Cement trailed with a loss of 17k to close at N20 per share.

Airservice depreciated by 9k to close at N3.20, while Dangflour and UPL lost 8k each to close at N9.31 and N3.98 per share respectively.

Staco emerged the most traded stock with 73.34 million shares valued at N36.67 million.

Related Topics:NSENigerian Stock Exchange
Up Next