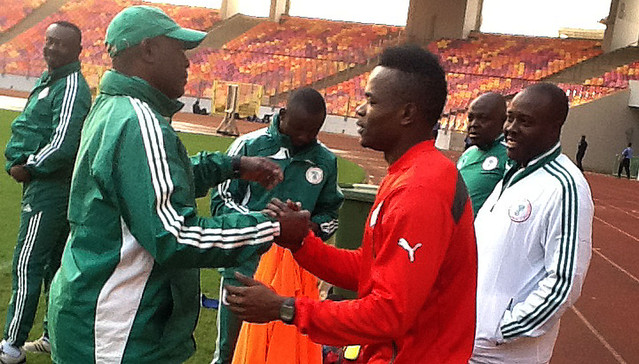 Lokomotiv Moscow and Nigerian forward, Victor Obinna Nsofor has paid a to the CHAN Super Eagles camp in Abuja where preparations for the African Nations Championship are underway

Nsofor disclosed that his visit was to encourage the players in camp by boosting their belief in the ability of the team to lift the CHAN trophy at first attempt.

He also went on to disclose that he has recovered from the injury he got while on national assignment with the Eagles against Ethiopia, and had resumed training with his club before the winter break.

“Coach I’m fit and well and have been training with my club before we went on the winter break,” Nsofor told an excited Stephen Keshi who congratulated him on his speedy recovery.

The former Enyimba and Kwara United star  is currently keeping fit at the Abuja National Stadium and is expected to feature for Nigeria at the World Cup in Brazil.

Aguero May Be Out For At Least A Month