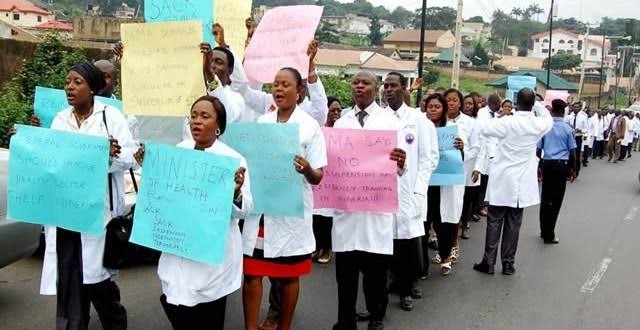 Medical Doctors in the employ of the Ondo state government, have commenced an indefinite strike to protest against the payment of half salaries for the month of November 2020 by the state government.

The medical doctors under the aegis of Ondo Government Doctors Forum (OGDF) said they are downing tools indefinitely, complained over the salary slash, saying they were not carried along by organised labour in reaching the agreement with the state government.

The striking doctors who said they were not members of organised labour in the state but professional bodies and should be consulted before the decision was taken.

Speaking on behalf of the striking doctors after an emergency meeting, the Spokesman for the OGDF, Dr Omolayo Olubosede, said a member of the association cannot survive on 50 per cent salary.

According to Olubosede, the doctors have earlier written to the state governor, Mr Rotimi Akeredolu, intimating him of their plight but said there was no response from the government

She, however, maintained that they would only resume work after payment of all salary arrears, appointment of more doctors to replace those that left, implementation of Group Life Insurance amongst others.

“Doctors in Ondo are working under harsh condition. We cannot work from home. It is unfathomable that we are being paid half salary. We are not insensitive to the hardship this action will bring. It is our hope that the government get back to us.” she said

The Acting Commissioner for Health, Dr JIbayo Adeyeye, acknowledged the letter sent to the governor on the issue but said the letter did not give any strike notice.

Adeyeye said that the state government would engage the doctors soon, assuring that the doctors would return to work as soon as possible.

Related Topics:Doctors’ Strike
Up Next

Just In: University workers to begin strike on Friday